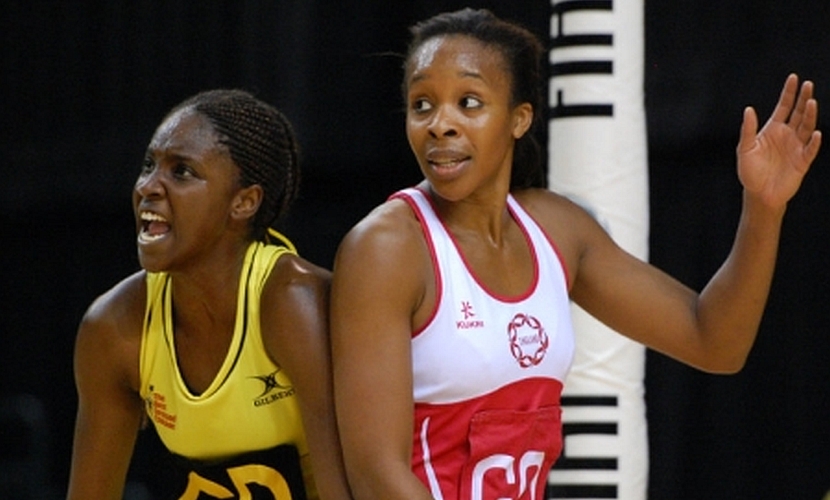 There were 50 minutes of intense and physical Netball on court at the LG Arena this evening, however the home side sped away in the final 10 minutes to record a 63 – 51 win over rivals Jamaica.

The tourists were greeted with a warm applause from the crowd when they stepped onto the court earlier, as the fans were rightly expecting an exciting contest between the 3rd and 4th ranked Netballing nations.

England, and Captain Pamela Cookey in particular were greeted with an even louder cheer, and the match began with Jamaica’s centre pass.

The first few minutes of the game showed a nervy 14 players playing scrappy Netball at times, whilst England’s Sara Bayman at Centre and Eboni Beckford-Chambers at Goal Keeper were twice pulled up for contact by Umpires Jono Bredin and Joshua Bowring.

Jamaica were the better openers as they applied pressure on the hosts continuing to turn over ball, but only to panic and pass it back to the hands of their opponents.

Their star shooter Romelda Aiken wowed the specators from the outset as she flung her long arms high and far over the back line to retrieve a long lofty ball sent to her from the centre third.

Aiken continued to help her team make life difficult for the hosts and at two goals a piece, the tone of the game was set to be intense.

Aiken’s partner in the attacking circle until half time was Anna-Kay Griffiths and she shot a respectable 13 from 15 attempts whilst on court. One such goal rolled all the way round the ring before dropping in, however England soon replied to make the scores level at three all.

The scoreboard followed a similar point for point pattern, until England reached a two goal lead at 11 – 9, and at the first break they lead by 13 goals to 11.

Neither Coach made any changes to their lineups during quarter time, and the teams returned to try and inflict pressure and take a lead.

The second quarter brought drama as England Captain Pamela Cookey hit the deck with a thud, only to be cheered back to her feet by the crowd. Cookey took a short time out but carried on playing. Coincidentally Jamaica’s Captain Nadine Bryan also sustained an injury however she went to the bench to be replaced by Patricia McCalla at Wing Attack.

An intense and heated physical battle was shaping up on court, as the teams went into the main break with just five goals separating them. England 31, Jamaica 26.

A slightly different attacking circle came back for Jamaica, as Coach Oberon Pitterson introduced her 1.96m shooter Jhaniele Fowler to Goal Shooter whilst equally as tall Romelda Aiken moved up to Goal Attack.

The towering pair had an immediate effect on the game, as the English defense unit struggled to keep both threats at bay. Jamaica clawed back to level 34 – 34 and went on the take the lead for the first time since the beginning of the match.

The home advantage was now called for as the Sunshine Girls extended their lead to two goals.

The crowed roared for their team to equalise, and Jo Harten did well to pull in a wayward ball and sink another goal. The young shooter put on a commendable performance throughout the evening, scoring a mighty 43 goals from 45.

More end to end action, and the crowd were in top gear, chanting ‘England! England!’

The scoreboard showed that there was not much between these teams so far, and going into the final break, the score was an exciting 43 all.

England were indeed the better side in the final period, and it was clear that as they ran away with the lead, Jamaica’s head dipped slightly. With 10 minutes left on the clock, and five goals separating them, the hosts continued their lead, finally closing the deal by 63 goals to 51.

A disappointed Jamaican Coach was clear that the next two games will tell a different story. ” We have two more games that we can win.” Pitterson said, ” it is fixable. And we are going to fix it.”