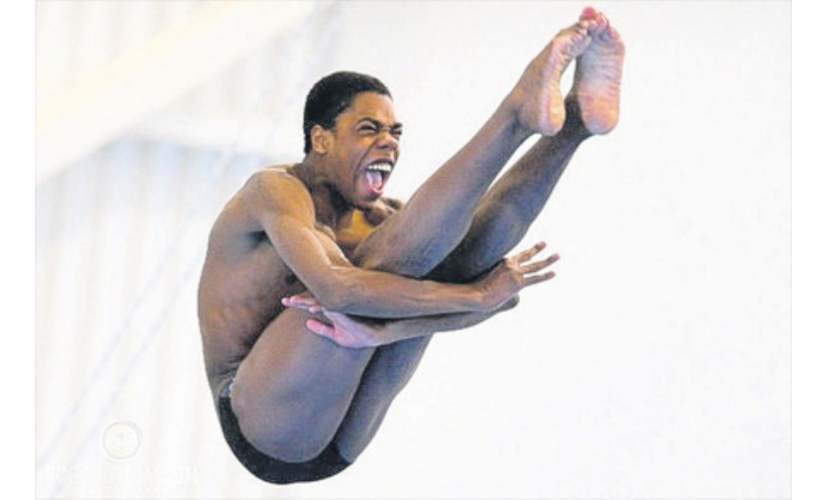 Yona Knight Wisdom has high hopes of joining Usain Bolt and Yohan Blake on the opening parade ceremony at the 2016 Olympics.

Yona made his debut for Jamaica in 2012 when he competed at an international meeting in Dresden, Germany, advancing to one of the finals and then at the prestigious FINA World Junior Diving Championships held in Adelaide, Australia.

Knight-Wisdom, whose father was born near Kingston, is officially Jamaica’s number one diver, their only one, but a highly talented individual who has high hopes of competing in Rio.

“Diving for Great Britain is at a really high standard at the moment with the likes of Jack Laugher and Tom Daley and all the other boys”, Knight-Wisdom confirmed. “It could be quite hard for me to get into the GB team at the internationals. But my coach, Edwin Jongejans, believes that I can compete at these international events to a decent standard.”

“He suggested that I switch to Jamaica and now I am Jamaica’s first ever male diver! And if I was to make Rio in 2016 I would be the first ever Jamaican diver to compete in an Olympics so there’s quite a lot of history in it.”

Diving is an expensive sport to compete in as there are travel and accommodation overheads to take part in national and international competitions and the cumulative fuel costs of training 6 days a week. For example in May, to gain international experience, Yona is off to the USA Grand Prix in Fort Lauderdale followed by the Puerto Rico Grand Prix.

This past Easter 2013 weekend, competing for his City of Leeds club, Yona Knight Wisdom won a gold medal at his last ever 1m event at the British Gas Elite National Junior Diving Championships scoring 502, a new Personal Best. The Elite National Championships is the highlight of the domestic junior calendar and was held at the John Charles Centre in Leeds where the country’s top under 18 divers, including Olympian Jack Laugher and the British internationals Josh Dowd, Jack Haslam and Freddie Woodward, battled it out for honours.

Another medal followed with the 3m event this time a silver scoring 526.75 which again is a huge Personal Best for the Jamaican international Knight Wisdom. Yona bubbling with enthusiasm confirmed: “I can’t be more happy with these results and it gives me huge confidence for the summer international competitions. Also a fantastic way to end my junior career.”

Yona currently is currently sponsored by Levi Roots, the founder of Reggae Reggae Sauce popularised by the BBC2’s Dragons’ Den series, is on his way to fulfilling his dream of competing in Rio in 2016.