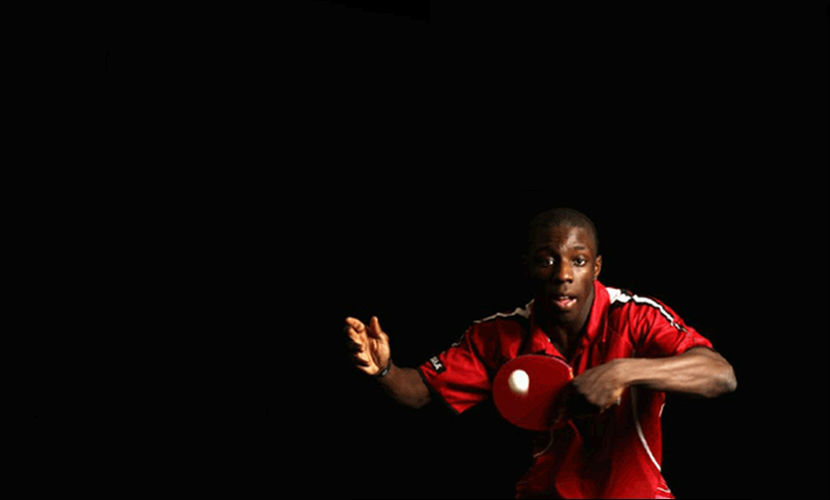 Look out for Commonwealth Silver Medallist and Table Tennis Superstar Darius Knight this year at the 2012 Olympics.

Commonwealth Silver Medallist Darius is a table tennis star, role model and ambassador for sport in the UK
He already plays for Great Britain on the ITTF World Pro Tour, as well as playing in the Spanish Super League. He is the three times national under-21 champion and is the figurehead for the Fred Perry Urban Cup which promotes Table Tennis in inner-city areas.

Before getting involved in table tennis, Darius spent his time hanging around with his gang mates on the streets and stairwells of his council estate in South London. Despite this, he has trodden a different path, one that he intends to take him to the top of the medal podium at the London 2012 Olympic Games.

His life changed in 2000, aged 11, after wandering into a youth club in Battersea and picking up a table tennis bat. Gideon Ashison was the only coach there and subsequently became Darius’ first table tennis coach. Although he was the worst player there, Gideon motivated him to improve. It wasn’t long before Darius fell in love with the sport. He quickly became fascinated by the speed of the ball, reactions and amazing spin created. Darius decided to give it his best shot to see where it would take him.

Gideon selected a few youngsters from the youth club, Darius included, to work with him in a garden shed belonging to a friend. It provided them with a free venue to practise uninterrupted every day. Darius improved significantly but it became clear that one table in a shed was not enough to progress further – he was limited by the facilities.

He was soon invited to live and train at the National Training Centre as his talent and potential had been spotted by the national coaches. Living in Nottingham proved to be a big change from life he was used to in London. The National Training Centre allowed Darius to solely focus on table tennis, blocking out all unnecessary distractions and pressures felt when living at home.

Darius worked hard on his strength, speed, stamina, consistency and concentration and this wasn’t in vain. His consequent rise in the English rankings was just one of the indicators of his huge improvement. Although his progress was slowed by a cut in funding by Sport England that led to the closure of the National Academy in 2004, a new, improved Academy was set up at Sheffield EIS, where Darius has trained since September 2008.

He has been playing above his age ever since he reached international standard when he was 14. Since then, he has been in the Top Ten in the English Senior Rankings and is currently ranked number 3. At just 16, he became National Under-21 Champion and in his last year, he won the Under-18 Junior Title, a fitting end to his Junior Career.

Recently competing at the Commonwealth Games in Delhi, Darius picked up an impressive silver medal in the men’s team event whilst also reaching the latter stages of the singles and doubles events.

In addition to all of his achievements at the table, he has had a strong impact on urban youth culture both as a role model and a celebrity, known for giving insightful and detailed interviews, and always speaking the truth. His determination and personality both on and off the table have left him well on course for his dream of success at the 2012 Olympics.

Darius is supported by Fred Perry and works alongside them in the execution of the Fred Perry Urban Cup aimed increasing participation in table tennis at a grass roots level. He also recently teamed up with Mark Ronson as part of Coca-Cola’s global Olympic campaign for 2012, which will see (and hear) him appear in a music track produced by Ronson and sung by Katy B, ahead of the London Games.