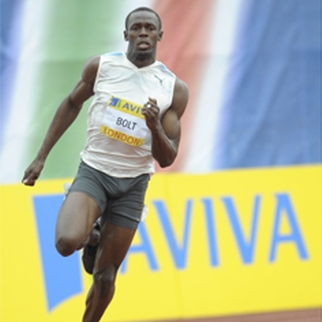 The Jamaican stole the hearts of sports fans around the world at the Beijing Olympics last August with his record-breaking performances on the track – and his sparkling personality off it.

Bolt became the first man in history to claim the Olympic sprint treble all in world record times when he took gold in the 100m, 200m and 4x100m relay. And he quickly became a Games legend with his trademark pre and post-race exuberance.

The event at Crystal Palace will provide many of the world’s best with a final chance to fine tune their preparations ahead of the IAAF World Championships in Berlin just three weeks later.

Bolt said: “I’m definitely looking forward to running in London at the Aviva London Grand Prix. London is a great meet and the fans there really get behind everyone. I normally base myself there during the summer so it is like a second home. As usual there will be strong competition but I guess that’s what I’ll need ahead of the World Championships.”

Winner over 200m in London for the last two years, Bolt’s time of 19.76 seconds in 2008 was the fastest ever over that distance in Great Britain. Now he can’t wait to show the London crowd what he is capable of over the shorter sprint.

He said: “Last year at Crystal Palace I felt great running the 200m. To win there in such style gave me a lot of pleasure. That helped to build my confidence towards achieving the three gold medals in Beijing a few weeks later.

“This year will be my fifth year in a row competing at Crystal Palace. On all four previous occasions I’ve ran in the 200m so it will be good to go out there and see what I can do in the 100m. I’m sure I’ll be able to put a show on for the fans.”

Bolt’s appearance at the Palace underlines once again the status of the Aviva London Grand Prix as one of the biggest grand prix on the world circuit. In the last few years stars such as Tyson Gay and Asafa Powell have all thrilled the London crowds.