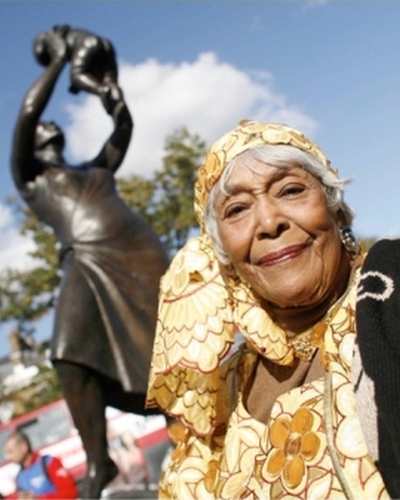 A poetry recital in honour of the first statue to a black woman in England took place on Saturday 8th October at in Stockwell Gardens. The mayor of Lambeth was joined by project founder and poet, Cecile Nobrega, to witness performances by Lascelles James, Poppy Seed, Sihan Osman, and Haroon Anwar with dedications from the Bronze Woman committee.

The Bronze Woman sculpture of an African-Caribbean woman holding aloft a child was created to celebrate the contribution of the Afro-Caribbean community to the Capital, on the 200th anniversary of the end of the transatlantic slave trade in 2008.

The Bronze Woman sculpture was supported to fruition by the Bronze Woman committee, Olmec a race equality organisation, following Cecile Nobrega’s ten-year quest to see this project through.

Internationally renowned sculptor Ian Walters was commissioned to handle the project in 2005 before the completion of his statue of Nelson Mandela which now stands in Parliament Square. Walters completed a two foot high maquette (pictured) of The Bronze Woman before he died in 2006. Aleix Barbat, graduate of Heatherley’s School of Fine Art completed the sculpture in 2008.

The sculpture is sited in Stockwell notable as the place where the first large group of West Indian immigrants into the UK after the Second World War was taken after disembarking the Empire Windrush ship in 1948.

Tanzeem Ahmed, Olmec founder, commented: "The Monument is many things – the first in England dedicated to black women; a tribute to the diverse communities that make up British society; and a symbol of the potential of women everywhere. It’s also proof that people with courage and determination can achieve their dreams and inspire others to do the same."