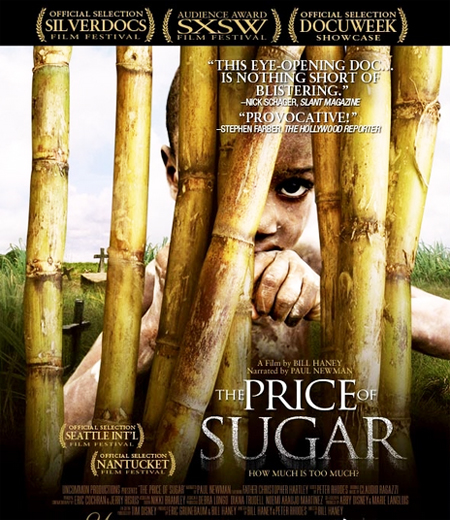 Documenting the sugar plantations in the Dominican Republic

This revealing film, narrated by Hollywood actor Paul Newman, highlights the exploitation of Haitan workers on sugar plantations in the Dominican Republic.

It is the middle of the night, and Father Christopher Hartley and his elder colleague, Father Pedro Ruquoy, have driven down a lonely road to reach the border between the Dominican Republic and Haiti. There, a busload of Haitians – presumably illegal immigrants, but ready to pay the expected, and informal, ‘fees’ to enter the Dominican Republic – are stuck waiting at the border.

Most of the travelers have paid a lifetime’s accumulated money to cross the border, but something’s held them up. They’re waiting for the trucks and buses to take them to the cane fields. There’s really nothing to be done for them, but Father Hartley does what he can, ultimately offering the only thing, and perhaps most precious thing, he has to offer: His prayers.

In ‘The Price of Sugar,’ filmmaker Bill Haney charts the heartbreaking plight of Haitian immigrants trapped in a modern form of indentured servitude – slavery is probably a better term – as they toil in the sugarcane fields of the Dominican Republic. Father Christopher Hartley, the son of a wealthy Englishman and a Spanish aristocrat, acts first as a guide, and then as a leading figure, in a graphic and dramatic cinematic tour of the harsh fields, the workers’ company-built bateyes (shantytowns), and, as much as possible, the luxurious homes and offices of the extraordinarily wealthy and powerful family who own the sugar plantations within Father Hartley’s sprawling parish.

You’d think Father Hartley would be a local hero. And the Creole-speaking Haitians are grateful for his help in getting them medical care, alleviating the worst of their wants, and providing spiritual succor. But many of the local Spanish-speaking Dominicans hate Father Hartley passionately, denouncing him as a ‘devil’ in demonstrations ostensibly whipped up by plantation owners.

So ‘The Price of Sugar’ delves not just into the plain and painful circumstances of workers who, incredibly in the 21st century, still must buy all their necessities at a company store. But director Haney also sketches out a less visible, but dominating, landscape of social, political, and economic forces all brought to bear on the sorrowfully expendable hands and backs of virtually-enslaved Haitian laborers. Haney’s three-pronged documentary was filmed over three years, mostly in the Dominican Republic but also in Spain. ‘The Price of Sugar’ is narrated by Paul Newman. And, perhaps most of all, it boasts a ‘cast’ of people whose lives and struggles are now thankfully inerasable, a cast headed by Father Hartley, but populated by an array of powerfully opposed forces, their pawns and, most crucially, those Haitians who may be cruelly exploited in the shadows thrown up by global capitalism, but whose humanity still shines forth brilliantly.

A film by Uncommon Productions 2007
The Price of Sugar