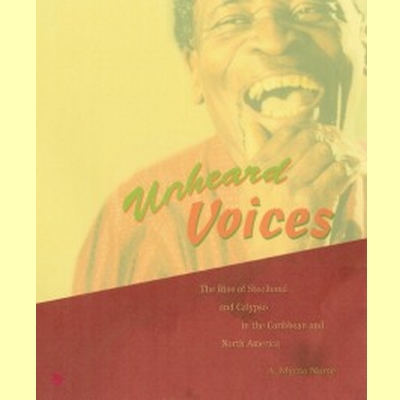 Unheard Voices: The Rise of Steelband and Calypso in the Caribbean and North America by A. Myrna Nurse

The first scholarly work that offers a description of how the Steelband movement, which originated in Trinidad, West Indies.

Unheard Voices will surely delight as well as inform you on facts about the movement revealed for the first time. Surely, you will want to add this important work to you personal library.

A compilation of twenty-two narratives, each story portrays pan-people’s perpetual struggle and triumph over much adversity to bring to the world the only percussion invention of the twentieth century.

Originating in the 1930s, the steelband (a.k.a. steelpan) movement began in the Caribbean, was transplanted to and grew in North America, and has transcended the boundaries of class, race, and gender. Based on a compilation of narratives from Caribbean and American members of the steelband movement, Unheard Voices: The Rise of Steelband and Calypso in the Caribbean and North America traces the history of this unique percussion invention of the twentieth century.

Author A. Myrna Nurse artfully describes the origin and innovators of steelband, the controversies surrounding the music and its leaders, and the violence that shaped the movement. Nurseâ€™s portraits of the Caribbean artists describe both their perpetual struggle against poverty and violence, and their innate will to create. Her discussion of the American musicians is a compelling presentation of the grit and determination involved in furthering “the pebbles of the pan.”

Unheard Voices relates the experiences of two of the movement’s fathers: Elliott “Ellie” Mannette and Neville Jules. Nurse also considers the women who have broken into this art form, as well as Calypso – the music of the steelband – itself. Unheard Voices is a welcome addition to the small but growing body of literature on the musical inventions of the African Diaspora.

About the Author
A. Myrna Nurse (nee Kirton) was born in Trinidad, West Indies, and immigrated to the United States in 1975. A naturalized citizen, she earned her PhD in Postcolonial Literature and Composition and Rhetoric in 1999 (Temple University). She is an Assistant Professor of English (Adjunct) at her alma mater where she teaches in its First Year Writing Program, and also at Delaware State University where she teaches Literature and Composition.

Dr. Nurse is married to Keith (30 years); their two children are Miranda and Alex. The family currently resides in Bear, Delaware.