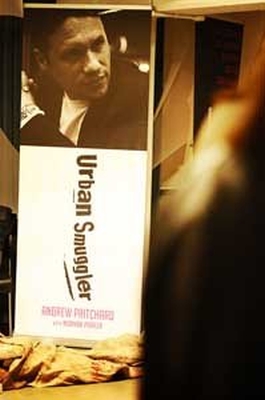 Urban Smuggler by Andrew Pritchard chronicles the rollicking life story of one of the most prolific smugglers of our time. In Urban Smuggler, he reveals just how easy it can be to import shiploads of contraband into the UK and exposes the corruption within the law-enforcement agencies tasked to tackle this kind of crime.

Urban Smuggler has all the elements of a Hollywood crime movie: gangsters, guns, girls, tons of money and half a ton of cocaine, enough to keep London’s clubland snorting for months, and hanging over the entire story is a poisonous cloud of suspicion.

The dramatic story reveals Customs officers spying on their colleagues. It exposes dangerous leaks and illicit dissemination of secret documents on a huge scale. The questions that hang over the whole Customs organisation paint a picture of betrayal, incompetence, mismanagement and perhaps corruption in Her Majesty’s frontline force against drugs – on a previously unimaginable scale.

In a case which is replete with claim and counter-claim, one fact that is undisputed is that top-secret and incredibly sensitive Customs documents found their way into the hands of the criminal fraternity – indeed, into the country’s prisons and, spectacularly, under defendants’ cell doors. How this happened remains a mystery but must have involved a chain of events that is startling in its scale.

Urban Smuggler is not just the story of one drugs bust, however sensational. Andrew Pritchard has led an extraordinary life. His story encompasses the reality of mass immigration from the West Indiesinto deprived post-war London in the 1950s. As a 21 year old, he was running illegal acid-house parties, such as Genesis events. Later, he went legitimate and staged the 1999 Sunsplash festival in Victoria Park.

This attracted 40,000 revellers to hear A-list artists, including Wyclef Jean. He was a magnet for the stars of urban black music, and Mel B of the Spice Girls attended the event as his guest, as did countless other artists from the UK, USA and Caribbean.

From start to finish, Pritchard’s tale is, without exaggeration, ‘stranger than fiction’.
Urban Smuggler