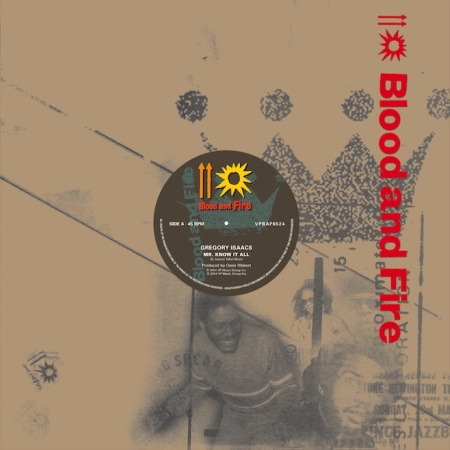 Founded in Manchester, England – Blood and Fire has been reissuing roots reggae, dub and DJ albums with a jazz-influenced packaging aesthetic since the early 90s. 2014 marks the 20th anniversary of its first release (If Deejay Was Your Trade: The Dreads at King Tubby’s 1974-1977) and VP Records has teamed up with the revered label for a strategic relaunch.

They will re-release 10 to 12 Blood and Fire collections with additional content and updated packaging this year. Also, the label plans to launch a merchandise line with the B&F logo and select album cover art, which will be bundled in collectable re-issue packages.

VP enlisted esteemed reggae historian and A&R Steve Barrow, who is one of Blood and Fire’s original founders, to oversee the album’s compiling, mastering and packaging and ensure that the product remains synonymous to the brand. He will be handling original B&F catalogue reissues with additional titles new to Blood and Fire.

“I look forward to working and continuing the fruitful relationship with VP Records, who have played a pivotal role in the production of reggae music since the early 1960s in Jamaica” states Barrow on the new collaboration.

Upholding a similar standard in presentation to classic jazz labels like Blue Note, Blood and Fire evokes Jamaican culture with simplicity and truth, providing top-quality archival recordings with superior packaging and design. They were the first reissue label to form a traveling sound system and tour with artists featured on their releases. Blood and Fire was also an early adapter in serving the online reggae community, providing one of the genre’s most active message boards to date.

“Blood and Fire presented reggae with premium quality and care as well as revived the careers of many unsung producers and performers,” says Chris Chin, CEO of VP Records.”We respect and admire the Blood and Fire brand and are delighted to be working together,” he adds.

The first release, available on Record Store Day (April 19th, 2014), will be a limited edition 12″ of Gregory Isaacs “Mr. Know It All” in a B&F sleeve with inner fascimile sleeve of the original Jamaican 12″ single. This vinyl-only release will be followed by the first batch of titles from the B&F catalogue in various formats