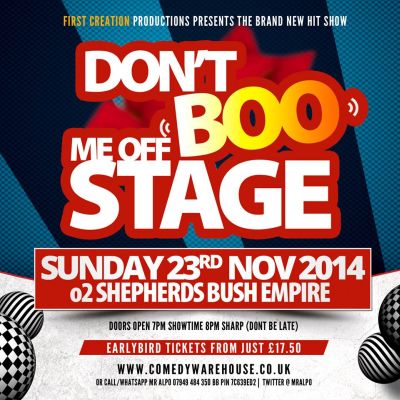 Come and see a wide range of divers acts including singers, dancers, musicians & more try their luck at pleasing a highly critical and merciless crowd ready to ‘Boo’ them off stage. Anyone who dose fall victim to an early retirement will subject to the infamous ‘SANDMAN’ (AKA KAT) who will stop them mid-song giving them an early bath…

If you believe you have the talent and want to be in with a chance to win please contact
Mralpo@hotmail.co.uk
Or call/whatsapp Mr Alpo 07949484350

Music on the night by: celebrity supa & gal flex (dixy)

Earlybird tickets from just £17.50
To be filmed for future broadcasting so look your best!!!

*Bought to you by Comedy WareHouse
SUPPORTED BY PULSE88 RADIO