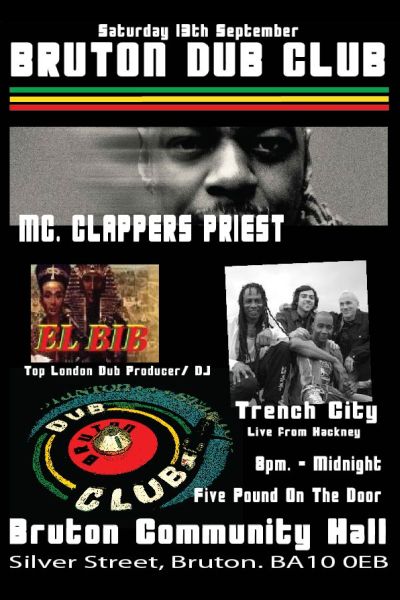 A Regular singer/MC at Londons’ Reggae Club, Passing Clouds, Reggae Roast, Notting Hill Carnival, Glastonbury and many others as well as many touring visits to Italy, Germany, Spain, Japan, and The Netherlands. He’s at your lyrical service with his unmistakable uniquely original style of blending Jamaican dialect with UK English…. to produce sounds for your acoustic pleasure.

Supporting him on the decks we have El Bib a Scottish London based dub/roots reggae producer and also the co founder of the dubvibrations.com net label along with his old spar, spanish dub/roots producer Don Fe, they have currently released 4 free download compilation albums to much praise from the worldwide dub community. El Bib is currently assembling a dub compilation with Amsterdam based Terralogica Records for commercial release later this year.

Live on stage we have Trench City a group with the passionate belief that no musical genres that can’t be welded together into a beautifully crafted song, Trench City take risks with many styles of music. From sparkling afro highlife guitars with laid-back reggae beats to classic soul/rock with funky Caribbean vibes, the band are all about creating new musical fusions, but always with a groove that gets your feet moving.

Trench City create an uplifting vibe of sweet harmonies mixed with rootsy beats. With a great new album to promote, Coming with the Force (available on i-tunes), a solid three years gigging around the UK supporting the likes of Asian Dub Foundation and Fun Lovin’ Criminals, a brilliant reception at Glastonbury festival last year, and a clutch of new material for the next album, Trench City will bring the joy