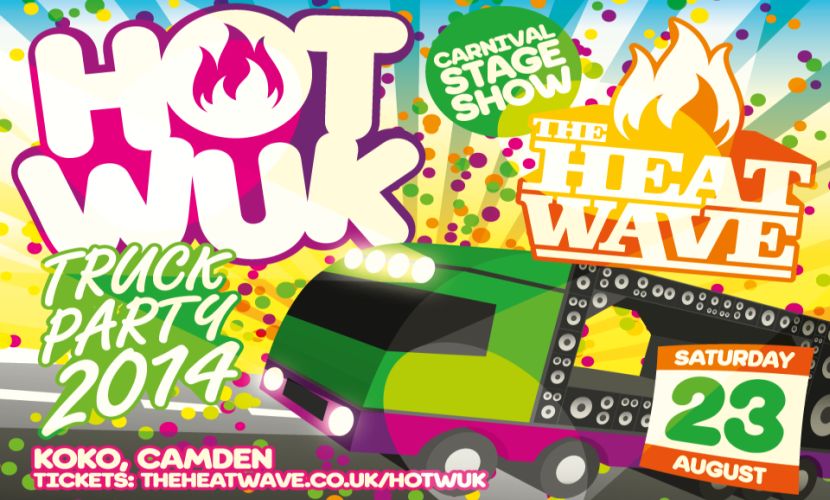 Warm up for Notting Hill Carnival with the biggest, baddest raving crew, The Heatwave, on August bank holiday
weekend. The Hot Wuk Truck is back, alongside the sexiest soca and wildest wining from The Heatwave DJs, plus
raucous regular Zi Zi Scandal, and dance crews CDML Crew, Element Dance and Hot It Up.

Formidable dancehall-force The Heatwave have been providing the UK’s bashment soundtrack for the past 10 years.The Heatwave sound ties together music from Jamaica and the UK. Their powerful, energetic and exciting compilations and mixes aim to show how dancehall can be found at the root of jungle, garage, grime, dubstep and funky music.

The Heatwave launched ‘Hot Wuk’ as a regular club night in 2009, and their weekly bashment party at The Social in
Central London followed in 2011. Early London success saw Hot Wuk roll out country-wide in 2012, hitting Bristol, Leeds, Nottingham, Manchester and Brighton.

As part of their evolution The Heatwave’s parties have now become a self contained live spectacle of dancehall culture; stageshows, carnival trucks, dance crews, MC’s and DJs… here’s to the next ten years!

£Heatwave: the most exciting new luminaries of London’s dancehall scene£
Time Out

£their collisions of dancehall, soca, one-drop reggae, grime and UK funky are always future-minded but with a firm understanding of heritage.£
Fact

"One of the UK’s best dancehall outfits"
Independent