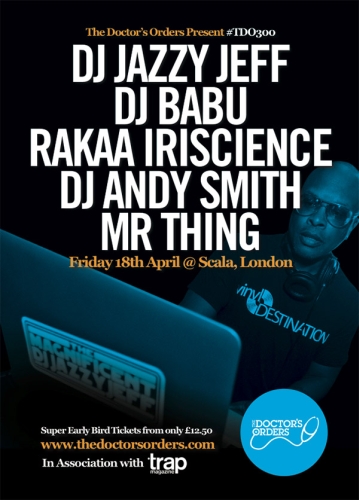 Ask any true Hip-Hop fan who their favourite DJ is and there is always one name top of that list, ‘The Magnificent’ Jazzy Jeff, so there was only one rational choice for us to headline our 300th event.

Since launching in 2005 we’ve been described as “Iconic” (The Metro) and as “The kings of the capital’s Hip-Hop scene” (Time Out) and we’re sure this incredible event will solidify our reputation for throwing the best parties in UK.

Topping the bill we have the man widely regarded as the greatest DJ on the planet, Philadelphia’s finest, ‘The Magnificent’ DJ Jazzy Jeff. Having come to prominence in the 1980’s as the DJ and TV sidekick to Will Smith’s ‘Fresh Prince’, he’s continued to raise the bar for Hip-Hop both through his phenomenal DJ sets and production for the likes of De La Soul, The Roots, Slum Village and Eminem to name a few.

A Jazzy Jeff set is that rare balance of technical flair, ingenuity and straight party rocking which stands him apart from the crowd. Having started spinning at the tender age of 10 he now has a DMC Championship and several Grammy nominations to his name but his genuine love of music keeps his feet firmly on the ground.
He is joined by a dream team of talent from both sides of the pond in the shape of Beat Junkies founder member DJ Babu and his partner in Dilated Peoples Rakaa Iriscience as well as homegrown heroes Mr Thing & Andy Smith.