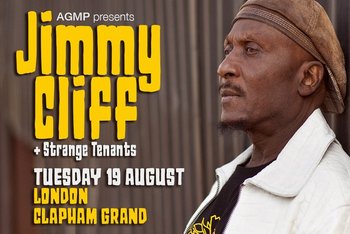 Jimmy Cliff was born in Jamaica in 1948 as James Charmers. He adopted the nom-de-plume of Cliff to express the heights he intended on reaching.

After his first few singles he was discovered by Derrick Morgan who hooked him up with Leslie Kong.

Their first collaborative single “Hurricane Hattie” was a huge hit and they followed this up with “King of Kings”, “One eyed Jacks”, “Pride & Passion” which set the ska scene alight.

In 1968 Jimmy Cliff relocated to London after signing with Chris Blackwell’s Island Records label. His first album “Hard Road” sold well but it was the following year’s “Wonderful world, Beautiful people” which became his first international breakthrough release. The Cat Stevens cover from this album “Wild World” was a massive worldwide hit.

In 1970 Desmond Dekker hit the number one spot with the Cliff composition “You can get it if you really want”.

The soundtrack to the film “The Harder they come” followed but it’s release was delayed until 1975. In the meantime, Jimmy Cliff signed to Reprise Records releasing great albums such as “Struggling man” and “Brave Warrior”. He stayed with them until 1981 before moving to Columbia Records. In the 80’s he toured with Peter Tosh and recorded with Kool and the Gang.