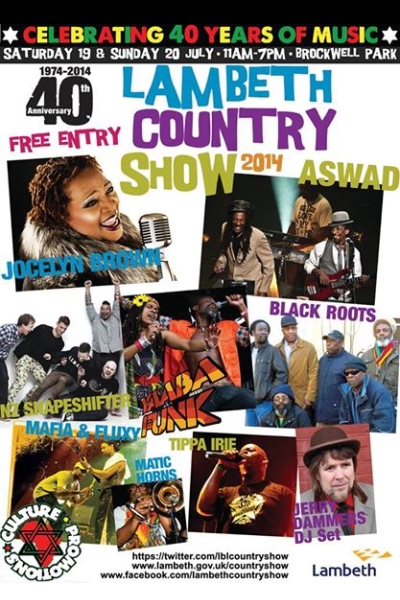 South London’s biggest outdoor event, the Lambeth Country Show is celebrating its 40th birthday this summer with what promises to be its best show to date.

Around 200,000 people are expected to join the fun in Brockwell Park over the weekend of 19th and 20th July to take in the live music, animal parks, food stalls, garden displays and lots more.

The show has all the attractions of a traditional country fair such as home grown vegetables, jams & chutneys. Horticultural shows along with sheep dog & owl displays happen throughout the weekend, but with a distinctly urban South London vibe.

In 2013, the show attracted more than 160,000 people, drawn to the truly eclectic mix of free entertainment and activities for all ages. This year sees the show split into nine zones, featuring music, art, theatre, sport and games, food, animals, horticulture and much more.

Music plays a big part of the country show and this year is no exception. Featuring an eclectic mix of latin dub, afrobeat, ska and soul, Sunday welcomes back roots and reggae and the Village Green zone will showcase an eclectic mix of local and national talent playing folk and country.

With over 300 exhibitors and traders, you can try food from the West Coast of Africa to Dorset Cream Teas; even the London Farmer’s Market will be selling their produce in the Farm zone. If you fancy bringing your own picnic with you, we have a dedicated picnic area for you to enjoy the scenery.