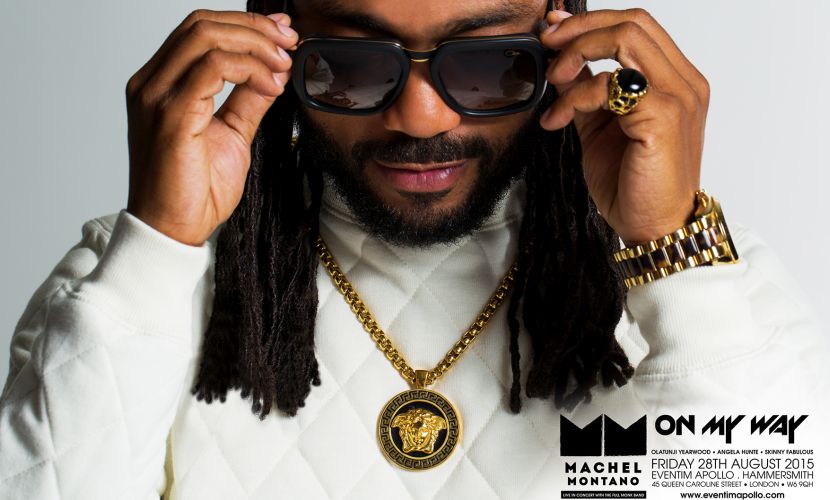 For one exceptional night in London, On My Way the only music concert set to supercharge Europe’s biggest street festival, Notting Hill Carnival weekend at the Hammersmith Apollo!

Clear your diary for the ultimate show-stopping concert set to launch Europe’s biggest street festival, Notting Hill Carnival on the 28th of August 2015 at the Hammersmith Apollo, London. Quite simply the only event to attend come Carnival Friday, straight out of the twin island of Trinidad & Tobago and hooking up with Brooklyn born, Grammy Award winning singer/songwriter Angela Hunte, 2014 Soul Train Best International performance act, Machel Montano and full band will be in London for one unprecedented night of music.

Best known on these shores for the 2015 hit single ‘Party Done’ and ‘Like a Boss’ (plus a long outstanding library of hits spanning 33 years with well known collaborations such as Pit Bull, Boyz 2 Men, Wyclef Jean, Morgan Heritage & Shaggy to name a few), Machel Montano will be performing alongside one of contemporary music’s most celebrated and sought after songwriter Angela Hunte who has written some of the chart topping hits such as Nas (“I Can”) and the 2009 top 10 best song “Empire State of Mind”, by Jay Z featuring Alicia Keys. Adding a raw element to the already impressive line up, winner of the 2015 St. Vincent & the Grenadines, Power and Groovy Soca Monarch titles, Skinny Fabulous will be present to add an energetic streak to what is already slated to be an epic night. Appealing to the groovy crowd, 2015 International Groovy Monarch title holder Olatunji will be on hand to diversify the night adding his own touch of Afro-centric beats and expert dancing moves to the special one-off show on Friday!

In what is sure to be the musical event of the year we hereby invite you and your friends to come and be part of a one of a kind celebration of 33 years of music and experience 33 years of memories in an electrifying performance that will leave many gasping for more.

This might be the only chance that London will see all star acts under one roof, for one night only. So grab a ticket before they run out and join us at the Eventim Apollo, Hammersmith, on Friday the 28th of August for the biggest concert the Notting Hill Carnival has experienced to date.