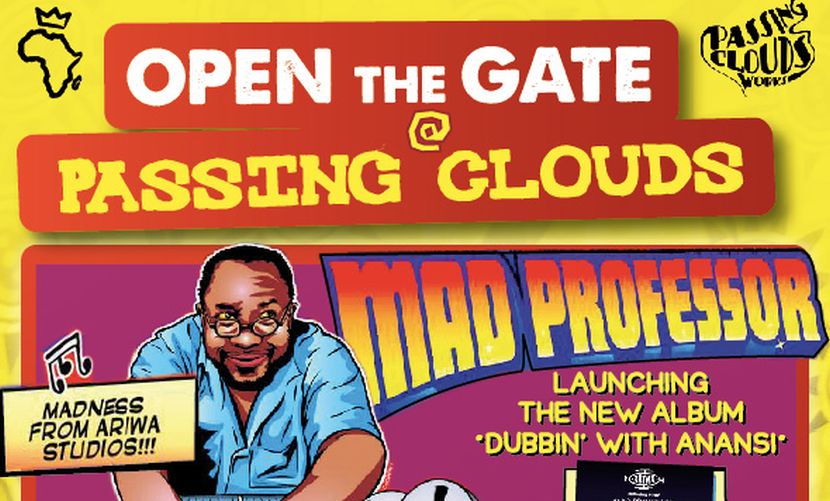 Open The Gate returns to the vibrant East-London venue Passing Clouds with yet again an original international line up showcasing 3 live acts.

The Worldwide famous Guyanese dub music producer Mad Professor will make you travel through his unique Live mixing of Dub, Dubstep, Reggae and Intergalactical sounds. In the past 30 years he has been collaborating with many reggae and dub artists such as Lee Scratch Perry, Dennis Bovell and recently Massive Attack.

Mad Professor will be launching the new album ‘Dubbing with Anansi’ on the night. This new dub album from Ariwa / Mad Professor is celebrating the African Caribbean folk hero Anansi.

Anansi is one of the few things that survived the Atlantic Crossing, and the transition from free African citizens, to exiles in the western world. Despite a situation where it was forbidden to speak in their native tongues, Anansi and the dubby, percussive African melodies, survived.

Desert Rock is the sound of old school Blues influences with hypnotic grooves and melodies from the Sahara. This multicultural outfit featuring British artist Ramon Goose and Senegalese composer and guitarist Abdoulaye Samb delivers energetic trancey rock blues dripping with West-African Mandinka rhythms to get back to edgier with their own style of playing, named “Afro-Blues”. They will be launching their debut album “Mississippi Mandinka” on the night.

To open the night, we’ll welcome Siemy Di, virtuoso Congolese-Brazilian drummer, percussionist and composer who explores the history of drums and percussions and will transport us to Africa via India and America.

The event is hosted by Open The Gate Sound, and completed by a special DJ set by Jamie Renton, and the reggae vibes of ROOTIKAL dj crew in the second room upstairs.