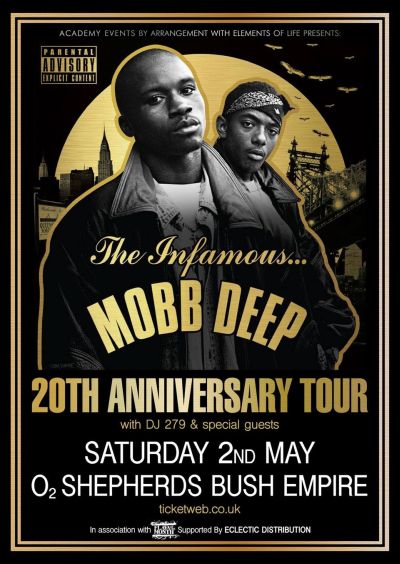 Havoc and Prodigy are critically acclaimed duo Mobb Deep, who are touring the UK for the first time in a decade to mark the twentieth anniversary of the now legendary album, The Infamous….

Now 8 albums deep and spanning 2 decades – Mobb Deep will be performing The Infamous in full, along with their classic tracks, so expect to hear ‘Shook Ones Pt.II’, ‘Survival Of The Fittest’, ‘Quite Storm’, ‘Hell On Earth’ and more.

With special guests to be announced, plus legendary DJ 279 dropping those classic Rap gems.

With guest appearances from Nas, Raekwon, and Q-Tip, ‘The Infamous’ propelled the duo to fame and gave the world classic hip hop anthem, Shook Ones.