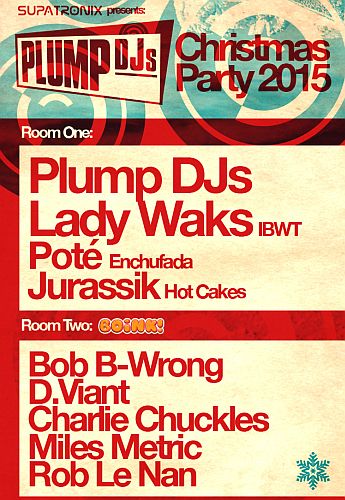 There are few more influential artists in the history of underground dance music than the Plump DJs. From their days as heralds of the breakbeat scene in its Naughties heyday, to festival-smashing, club-rocking globe trotters and icons of eclectronica in the present day, Andy Gardner and Lee Rous have flown the flag for forward-thinking beats undercut with the most synapse-smashing melodies imaginable for the best part of two decades.

With Christmas fast approaching, who better than to fire up the bassbins at Brixton Jamm for a festive trip into all that’s great about 21st century dance music, celebrating the Plumps’ rich history and current impact on the cultural zeitgeist. From the classic Fingerlickin’ slammers “Skram” and “System Addict” to brand new smashes such as “Like A Boulder” and the killer new release “Spheres”, expect dizzyingly destructive, heartstring-tugging music of the Plumpest order.

Co-headlining, all the way from Russia, comes First Lady of bass and breakbeats Lady Waks, for a rare UK excursion. Waks is a guaranteed party starter and world-renowned player who’s the perfect crowd-pleasing DJ to send our festive blazeup into the stratosphere.

Our third headliner is the mighty Poté, the hyped 21-year-old London producer and DJ whose carnival-laced original productions and official remixes for the likes of Lethal Bizzle have seen him heralded by BBC Radio 1 and 1Xtra DJs Mistajam, Monki, B Traits and Phil Taggart. Poté recently recorded a Freshman Class 2016 mix for Toddla T at the legendary Maida Vale studios, showing just how highly he is regarded. If a culturally-rich blend of raw yet infectious percussive grooves, skilfully-spliced vocal cuts and driving, bully-boy sub sounds like your kind of thing, we guarantee he’s going to butter your crumpet.

Support in room one comes from Supatronix’s Jurassik, best known for releases on Deekline’s Hot Cakes imprint and gigs across the UK and beyond.

Room two will be hosted by those masters and mistresses of bacchanalian bouncing beats Boink! These festival favourites, who have hosted rooms at Carousel and put on their own boisterous rammed out North London parties, will be sending down an eclectic mix of beats to keep the party rolling til the early hours. Expect nuthouse rave chicanery hosted by Timmy Mallett’s psychedelically inclined, even-more-boisterous younger brother, the legendary Bob B-Wrong!