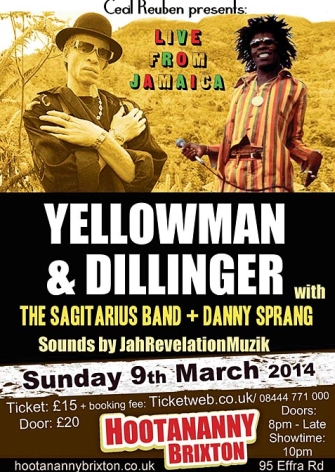 Cecil Reuben presents: YELLOWMAN and DILLINGER backed by the Sagittarius Band. Yellowman became the first dancehall artist to be signed to Columbia Records.

Yellowman has had a substantial influence on the world of hip hop. He is widely credited for leading the way for the succession of reggae artists that were embraced by the growing hip-hop community in America during the 1980s.

The basic rhythm of his hit “Zungguzungguguzungguzeng” can be traced throughout the hip hop scene as it was reused by such hip hop giants as KRS-One, Sublime, Notorious B.I.G., Tupac Shakur, and Blackstar, formed by Mos Def and Talib Kweli.