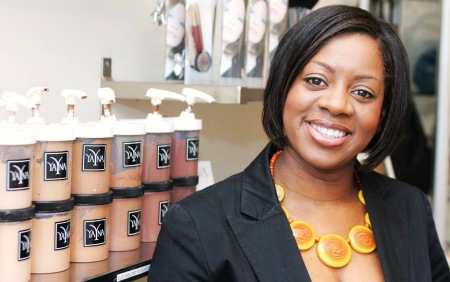 Founder of Yana Cosmetics and successful business woman Yana Johnson has been awarded an MBE for ‘outstanding achievement and service to the cosmetics industry’ in the 2009 New Years Honours List.

Yana Johnson MBE has been supplying women of all shades with cosmetics for 7 years and in that time she has put the UK on the map in the International cosmetics industry. She has won a string of National and International awards for her business prowess and entrepreneurship including the European Federation of Black Women Businesses Owners Award, British Female Inventors & innovators Award and Black Enterprise Award.

Yana is the brand of, one of the iconic figures of Black celebrities in the UK. Born in Birmingham, England to Jamaican parents in 1969 Yana Johnson started her own cosmetics line Yana Cosmetics, in 1992 after completing a BSC at Greenwich University and opening at a department store in Brixton she, quickly gained a popular clientele winning awards for her innovation and entrepreneurship. Yana is flying the flag for Black Britons with only six per cent of this year’s Honourees coming from ethnic minority communities.

Commenting on her award, Yana Johnson MBE said, “It is extremely wonderful to have been recognised for that which I am truly passionate about, considering that I also represent the very market that I serve. It’s a case of standing up for what you believe in and doing something about it”.

Yana Cosmetics is the only British Independent Premium Make up brand for the ethnic market, which started by specializing in custom blended foundations for black women and has developed a full range of make up and skincare that is suitable for ALL skin types.

In (2008) Yana expanded the brand by launching the Yana Make-up Representative Programme (YMR) bringing empowerment to women through reselling Yana make up and providing them with the skills to become Make-up artists.