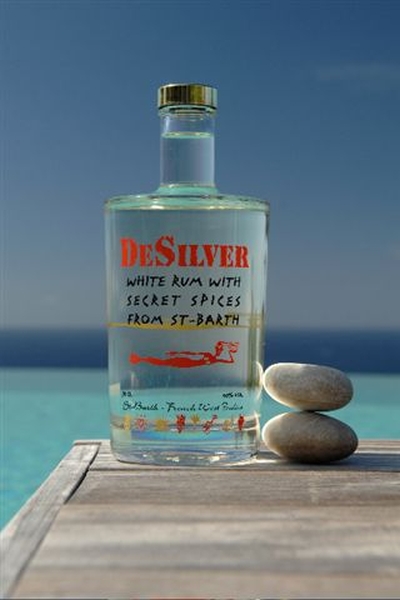 Probably the first and only WHITE Spiced rum on the market, DeSilver is sugar cane rum that is double distilled with secret spices added to the second distillation. It’s a perfectly clear white rum with the spices sourced from St-Barth.

In the 17th Century, piracy in the Caribbean was everywhere, one man, a horrifically cruel pirate, who was most feared throughout the seas went by the name of Captain DeSilver!

It is said that he carried a silver sword which he was extremely skilled with and his speed using it earned him the nickname ‘DeSilver’. Legend has it that his speed, strength and vitality came from a secret spice mix that only he knew.

He mixed Caribbean Rum with this secret spice mix and left it to marry in a cave – this elixir was the secret of his success!

Whatever the legend, DeSilver is a product offering a unique proposition to the buoyant rum market, and further variation in flavoured clear spirits.

What do ‘the experts’ say about DeSilver?

"Gingerbread and vanilla blend well on the nose, with subtle dry spices on the finish. Fresh spice on the palate, although subtle hints instead of a big boost. A little dry, with a creamy texture and ginger lingering after-taste. Not bad on its own at all, and very different to what you would expect, especially comparing it to darker spiced rums. It’s subtle instead of a heavy base, perfect for the likes of a Daiquiri perhaps."
Dave Marsland. The Drinks Enthusiast.

"At the Northern Restaurant & Bar Show I came across this rum at one of the stands and was immediately enticed by the fact that it was a spiced white rum, especially as most spiced rums (if not all) are dark or golden – so naturally had to try it! On the nose there are definite hints of black pepper, cinnamon and fresh sugar cane.The taste is quite compelling! Initially there is quite a peppery tingle followed with ginger and fresh sugar cane. Slight tastes of fennel and coconut (although not a particularly sweet rum). In terms of cocktails, we made these two at an event sponsored by St Barth last week at BoxPark and they are definitely worth making at home!

"We’re definitely not short of new spiced rums at the moment, but DeSilver offers something a little different. For one thing, it’s clear… During its second and final distillation a secret blend of spices is added to the St Barth sugar-cane rum base. This means the flavours are clean, with agricole-type fruit notes mixing with woody spice and citrus peel aromas, leading into a bright, refreshing palate that nevertheless has some silkiness to it too. It’s an interesting, and no doubt versatile addition to the category."
News item from Imbibe.com

This rum is marketed with a sailor’s yarn about a feared 17th century pirate called DeSilver who is said to have drawn his strength and vitality from a secret blend of spices infused in Caribbean rum. Appropriately this is a ‘spiced rum’ and perhaps the first crystal clear ‘white’ spiced rum.

DeSilver White Spiced is distilled using a process similar to gin with the botanicals added to the still prior to the second distillation.

"I attended the Northern Restaurant and Bar show and got to try DeSilver Spiced White Rum…it takes a second to get your head around the concept given that ALL spiced rums that I’d previously tried were gold or dark…never white…it may even be the only one, but it works, and it works well.

In the glass: The rum is crystal clear with a little alcohol up front. Ginger immediately jumps out along with anise and slight nuttiness. It doesn’t smell sweet at all. A little savoury with black pepper and a real depth of spice but it retains a freshness and an agricole edged vegetal base full of fennel, cinnamon and fresh sugar cane. I don’t detect much vanilla but I believe it’s there in the background, just carrying the spice. It may be me, but I can smell a little black cardamon note. Very interesting stuff and unlike any spiced rum I’ve encountered.

In the mouth: Straight away there is a white pepper tingle up front and the rum dries out rapidly. Fresh cane, freshly cut ginger and fennel dominate. Not fighting for attention, just coming in waves. The finish is creamy and long with the ginger and fennel lingering for an age. Slight anise to round out a really pleasant experience. But a VERY different one. Leave your preconceptions at the door.

As a drop to be sipped neat, it’s actually a pleasant and unique experience. It’s almost a palate cleanser……..
I tried a Spiced Daiquiri using the standard quantities. It was lost behind the lime and lacked the sweetness, even with the addition of sugar syrup. When changed up, reducing the lime to 15ml and upping the sugar syrup by 10ml, the whole drink combines to lift the spice above the citrus and the extra sweetness compensates for the savoury nature of the rum. It’s all about finding the balance for the spice. All in all, a very different but very interesting take on a spiced rum."
Rum Diaries Blog (Stephen James)