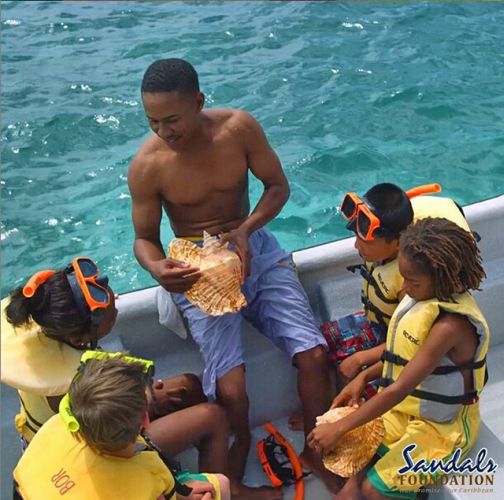 The Sandals Foundation has lauded the successful hosting of the Saint Lucia National Trust (SLNT) five-day summer programme where some 40 young people between the ages of 9 and 17 were treated to an enlightening week of education and awareness of the marine environment.

The event, held under the theme ‘Healthy Oceans-Healthy People’, was hosted at the Vieux Fort Primary School.
Jonathan Hernould, Environmental Officer for the Sandals Foundation said the decision to support the SLNT for a second consecutive year was an easy one because of its focus on environmental preservation and education.

“We are extremely excited about this partnership and we hope to sustain it for years to come. It is important to us that our children understand and appreciate the significance of the marine ecosystem and the roles they can play in not only preserving it but also using it for gainful and sustainable means,” Hernould said.

In June, the Sandals Foundation sought to further underline its commitment marine preservation and education in Saint Lucia with a World Ocean’s Day activity on June 8 with the students of the Gros Islet Primary School.

The youth in the SLNT programme were afforded the opportunity to better understand the Pointe Sable Environmental Protection Area (PSEPA). They were also exposed to a series of snorkeling experiences allowing them to identify and appreciate the flora and fauna of Saint Lucia’s marine life – from turtles, to coral reefs and mangroves.

Art and craft also formed part of the weeklong activity committed to fostering education and outreach in what the SLNT has described as a wider capacity building initiative for marine protected areas management in the OECS.

Clean Energy and the Future of the Caribbean

Sustainable Tourism in Trinidad and Tobago