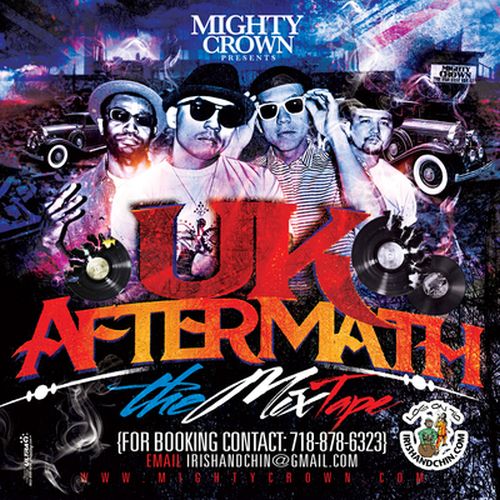 Mighty Crown is no stranger to incredible mixes. In fact, the popular Japanese sound system is notorious for dropping straight fire. And without question, the high powered and intense “UK Aftermath” mix certainly lives up to the sound kings’ high music standards. Fresh off the heels of headlining a sold out performance at the UK’s famed O2 Brixton Academy and a colossal show alongside Stone Love, Mighty Crown wanted to treat fans with the special release for their diehard support. Much to their credit, Mighty Crown’s red-hot mix gained the attention of Largeup.com, resulting in a feature on the site’s infamous “Mixtape Mondays.”

The internationally renowned sound continuously solidifies their position as a world clash champion sound by ensuring that top notch exclusives and dub plates are a part of their live performances and mixes. True to form, “UK Aftermath” is chock full of dubs and unforgettable Dancehall tunes! The summer smash “Inna Real Life” from burgeoning Dancehall act Vershon kicks off the top heavy mix. And it only gets better from there. The mix, which doubles as a tribute to UK fans, features a who’s who of Reggae and Dancehall artists. Tunes and exclusives from the likes of Kranium, Konshens, Tarrus Riley, Chronixx and more perfectly round out the super sound’s latest jewel.

Mighty Crown’s selectors were amped upon their return from England, citing UK Reggae music fans for being extremely loyal and supportive of their 20+ year career. Quite frankly, because of high demand, it’s not rare that “The Far East Rulaz” tour the UK at least 2x a year. No worries for the massive though, as all Reggae music lovers will get a charge from the mix. “UK Aftermath” rocks from start to finish!

Mighty Crown’s latest mix exceeds expectations. While “UK Aftermath” will easily wet the palates of Dancehall fans through the fall, the sound is already in the lab brewing up their next musical treat. Stay logged on to irishandchin.com and Mighty Crown to keep up with the sound’s new releases, performances and much more. Plus, using the same handles @irishandchin and @mightycrown, you can keep up with the sound’s movements in all the social media.