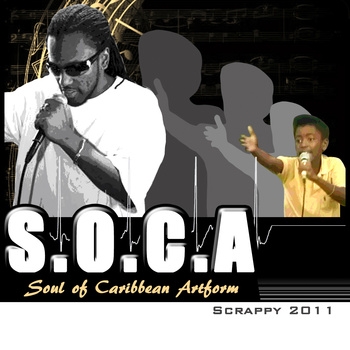 Since his emergence on the Soca scene in 2005, Scrappy has been delivering quality music, showcasing his personality, style and distinctive voice. Scrappy has a new album ‘S.O.C.A – Soul Of Caribbean Artform’ out now and has just won the 2011 Calabash Award for Best Soca Artist.

You have just released your latest album (S.O.C.A) how has the reception been?

The reception for the album has been kind of good so far. I think my choice to sing a song in “patois” or Creole has thrown people into a little debate. They are asking if I speak French now… Hahaha…

You have collaborated with different producers already, but is there anyone in particular you would like to work with?

I more aim to work with producers who are not really known. They work really hard to get their names out there and I like the hunger they have. Sometimes success makes people relax more.

Of all your tracks, do you have a favourite?

You have travelled around the Caribbean, Canada and Europe performing at festivals and carnivals where have your favourite destinations been?

My number one spot is Montserrat. With Montserrat I get to show what we have exposing to the world, motivate local acts to push for success and I get to go home. I really liked Preston, London, Toronto, Berlin and Holland.

Tell us your thoughts on the Soca music scene, how do you think it has changed over the last decade.

Well the scene is a lot more diverse. Everyone from producers to artists are doing a lot of experiments and we are using a lot more proper procedures like marketing strategies.

Is there an emerging soca talent that you rate at the moment?

Yes.. Me.. lol. I am playing. Because I am more in touch with the UK I would say I am impressed with Muzik Lil Muzik. They have worked so hard in the last 2 years.

What advice would you give to an aspiring soca artist today?

Learn the industry. It is not just about coming and singing. Do the research and find out really what you need to know. The artform is very nice and fun but it also is a hell of a challenge that could break you but knowing is 50% of the job done

Tell us more about your record label.

Well I did a demo and sent it to a record label back in 1998 I think and they replied with a letter saying no. I never was told no where music is concerned so I decided that I will start my own record label so with the assistance of Rising Tide a music charity in Hackney.

What other projects have you been working on?

Well currently I am working on a project with my national bird of my country (Montserrat) ‘The Oriole Bird’ and I am turning it into a cartoon. I am hoping that I can get that programme on TV. Fingers crossed.

What have you got lined up for 2012, and where can your fans see you perform?

Well for 2012 I am more working on gigs for my band. I have a band called Tropical Storm and we are UK based. London specifically and we are looking to have a show on the 13th January in London. Just join the mailing list on my website and you will be sent the details in about 2 weeks. Also I have a few gigs in Europe coming up so all of that information will be available and ready