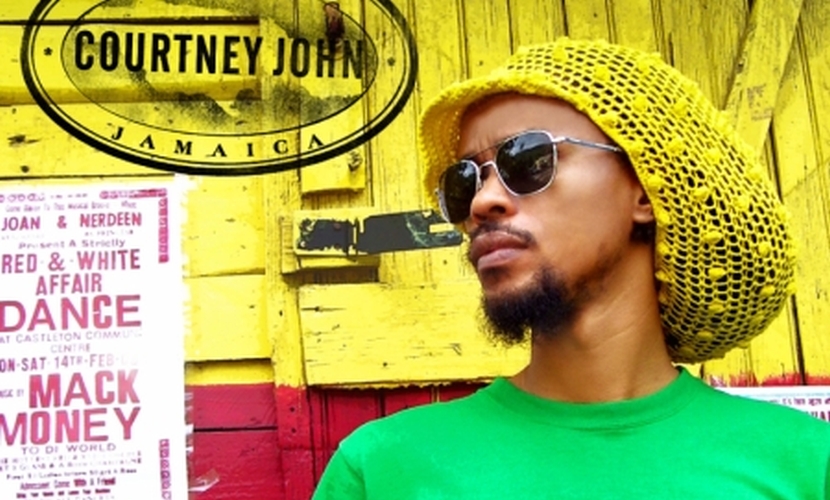 Singer/producers/songwriter Courtney John, the artiste formerly known as ‘Yogi’ has been steaming up the airwaves worldwide with the latest release of his hit single ‘Lucky Man’ a song that quickly captured the radio waves with its vintage treasure isle feel and his neo-vintage soundscape has become a local and international hit. ‘Lucky Man’ is the first release from his upcoming album ‘Made in Jamaica’ which is his third career album, and is poised to be the premier track for the album project, a Lovers Rocker album that has a release date of June 17, 2009.

“The album is slated for online release in a few weeks, and the lead single ‘Lucky Man’ has already topped online charts worldwide and is making its way up International charts in Europe, Canada, and the Caribbean. Demand for the single on vinyl has been extremely high and if this trend continues the 12 track album will be a surely be a scorcher this summer” – The Reggae News Agency

The start of 2009 found Courtney John in the US on tour with legendary, Reggae Rocker Micheal Franti on the ‘Michael Franti & Spearhead Hey World Tour!’ Courtney then completed his newly released album dubbed ‘Made in Jamaica’ which is poised to be a noteworthy step in the next phase of his career, as the artist sets his sights on the international mainstream market. ‘Made in Jamaica’ will hit record stores on June 17, 2009. The album contains 14 tracks, including the next smash single ‘Miss You’, which has captured primetime airwaves at home and aboard. The noted Pioneer producers, Sly &Robbie and the music genius, ‘Lenky’ Marsden amongst others have laid hands and ears on this new project.

Featured in 2004, New York Times – a Jamaica Special, Courtney was reviewed as ‘the artist to watch’. In response, Courtney released his much anticipated compilation album titled ‘Unselfish’. The album’s music videos ‘When You Say’, ‘Sometimes’ and ‘Hey’, are viewed in rotation on Much More Music, BETJ, MTV Jams, Demand, VH1 Soul, Tempo, and Jamaica’s Juice TV, Hype TV and CVM.

“His songs Baby Tonight, Sometimes and When You Say have been getting quite a bit of airplay and helping to solidify his fan base.” – The Sunday Observer (Feb.10.2008) Nominated for many local male singer awards Courtney John has made his mark in Jamaican reggae music and as been consistently expanding his fans base. His sophomore album, Unselfish is evident that music lovers (both local and international) have been catching on to Courtney’s work.

Described as a confident performer whose personal style encompasses a masterful blend of a cool and earthy sensuality, Courtney states, his inspirations not only include his uncle, Beres Hammond, but also Alton Ellis, Dennis Brown, Lionel Ritchie and Stevie Wonder.

Courtney’s career started off earlier and at the age of twelve, Courtney had written and performed his first song. Later, through various jam sessions, he honed his musical skills in writing, arrangement and instruments. Combining his passion for creating Co-founding FIWI Music, branded in the industry for producing quality music; Courtney released his critically acclaimed debut album ‘Miracles’. Under the stage name ‘Yogie’ Courtney became one of the hottest, up and coming artiste, receiving international recognition in Top Ten Singles for ‘I go Crazy’, ‘That was Then’, ‘Brighter Days’ and ‘Here Again’ featured on Reggae Hits 2001.

Built on the success of ‘Miracles’, Courtney produced and collaborated with today’s top international artistes, in chart climbing remix hits, such as Nelly Furtado’s ‘Turn off the Lights’ and ‘Say it Right’, and Jarvis Church’s ‘Run for Your Life’.

The captivating, sultry, and romantic sounds of Courtney found within his own tracks is also evident in chart smashing hits, ‘Can’t Stop a Man,’ by Beres Hammond, and Marcia Griffith’s ‘Shining Time’.

“Courtney John has proven his worth to fans and critics alike, securing his reputation as one of Jamaica’s most talented musical innovators to emerge in the 21st century “- Reggae-sumfest-2008