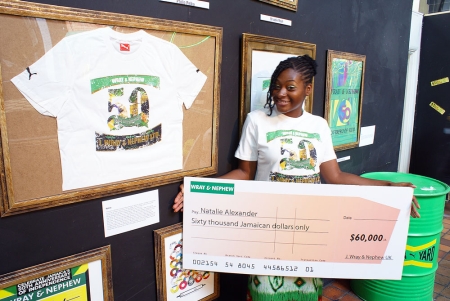 To mark the 50th Anniversary of Jamaica’s Independence this week, Wray & Nephew White Overproof Rum unveiled the ’50 YEARS OF J.A. WITH WRAY’ exhibition at the PUMA YARD on Sunday 5th August.

The ’50 YEARS OF J.A. WITH WRAY’ exhibition, which celebrates Wray & Nephew’s Jamaican heritage as well as this important milestone in Jamaican history, showcased the winner of the Wray & Nephew White Overproof Rum limited edition t-shirt design competition, which launched on facebook in early June.

The winning design by Natalie Alexander, was selected for its creativity and representation of the rich heritage and culture of Jamaica and celebration of the 50th Anniversary of Jamaica’s Independence. Natalie has had her winning design created into an exclusive limited edition t-shirt, was presented by Wray & Nephew Overproof Rum with a cheque for $60,000 JA dollars. A selection of other designs, including runner ups; Richard Brownlie-Marshall and Ruth Francis, Jamaican artist Little Roy and Reggae collective Reggae Roast are also showcased in the exhibition.

The launch of the ’50 YEARS OF J.A. WITH WRAY’ exhibition kicked off the 50th Anniversary celebrations in true Jamaican style on Sunday as crowds of fans at the PUMA YARD watched the 100m final. The atmosphere was electric as the crowd watched the fastest man alive bring home gold.

The Jamaican-themed PUMA YARD, openuntil 12th August , offers a convergence of music and lifestyle activities; delivering a unique consumer experience. All things Jamaican are a feature of the PUMA YARD including Jamaican rum which the island is famous for. There will be bars throughout the venue serving Jamaican rums Wray and Nephew White Overproof and Appleton Estate in a range of drinks and cocktails guaranteed to bring authentic Jamaican flavour.

Wray & Nephew Overproof Rum was created at The Shakespeare Tavern in Kingston, Jamaica, by John Wray back in 1825. Today it is still made just outside of Kingston and is the white rum of choice in Jamaica. At 63% ABV, Wray & Nephew Overproof Rum is not your average white rum; it offers a unique and distinctive flavour created through the purest form of rum production.

The PUMA YARD, situated within The Boiler House, part of the Old Truman Brewery on Brick Lane in Shoreditch, East London, is the ultimate destination in London this summer. Admission is free, but advance booking is required. To register visit, www.puma.com/yard and register for access.

The Wray & Nephew Overproof Rum Limited Edition T-shirt Exhibition will be on display at the PUMA YARD until Sunday 12th August 2012.

For more information, please visit the Wray and Nephew website