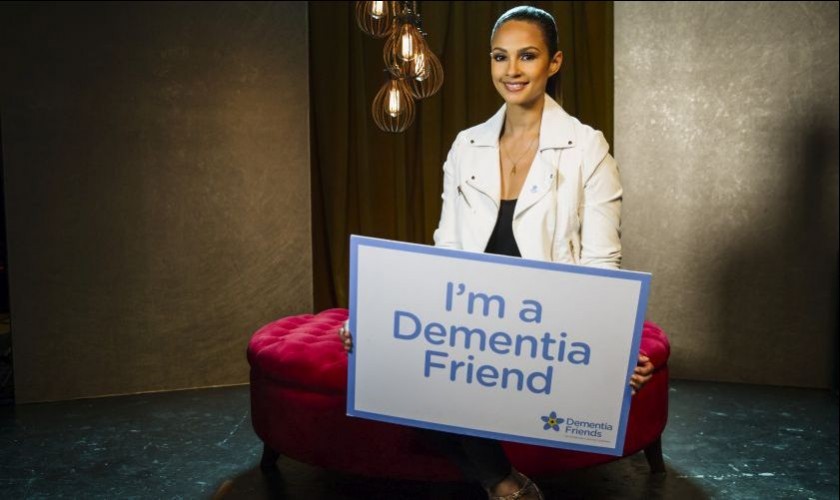 Joining the campaign to show her support for Dementia Friends and people with dementia, Alesha Dixon and Levi both feature in a selection of films and messaging to bring home the facts about dementia and help dispel some of the myths surrounding the disease.

Commenting on Dementia Friends, Alesha says: ‘We tend to be a very impatient society and you would probably meet someone with dementia and not even know they have it, therefore might not have the right sensitivity, compassion or tolerance. That was the lesson for me when becoming a Dementia Friend, because even though I know people who have had family members with dementia, I haven’t had a personal connection to it, so it was a good lesson to learn.

It’s important for people to know that you can live really well and have a great quality of life with dementia, especially if you have the right people around you who understand.

It takes less than five minutes to watch the video, and it would mean so much to people who have dementia if you took that little bit of time to recognise what they’re living with, what they’re going through and how as a society, we can come together and help.

Two thirds of people with dementia are women. Join me in becoming a Dementia Friend to help all those affected with the disease.’

Established by Public Health England and Alzheimer’s Society, the campaign tackles one of the biggest health issues facing society. Of the 665,000 people in England and Wales living with dementia, it is estimated that approximately 25,000 are from ethnic minority communities. This figure is expected to rise significantly as the ethnic minority population ages. By 2026 it is likely to have doubled to nearly 50,000 and by 2051 to over 172,000 – representing a seven-fold increase in 40 years. Chef and entrepreneur Levi Roots adds: ‘Joining the Dementia Friends campaign has been important for me because I didn’t know much about dementia. It’s about educating myself and if I can encourage anybody else, it would be fantastic. I grew up in Jamaica where there’s not much awareness about dementia. If you mention it to people there, they think it’s just a result of old age but it’s not. Before joining the campaign, I didn’t know it was actually a disease. Living with the disease can be helped or bettered by conversation, so I’m here to both educate myself and hopefully, others.’

Dementia is caused by diseases of the brain. There are over 100 types of dementia and the most common is Alzheimer’s. It mainly affects (but is not restricted to) people over 65 years of age. It is not, as widely believed, a natural part of ageing, and can affect anybody regardless of race or social background.

The initiative forms part of the Prime Minister’s Challenge on Dementia, and builds on commitments declared at the 2013 G8 Dementia Summit, which included a call to improve the quality of life for people living with the disease.

To become a Dementia Friend, visit dementiafriends.org.uk and watch the short video, or find an information session run by a Dementia Friends champion (a trained volunteer) in your area. The full film of ‘With A Little Help From My Friends’ is also available to view on the site.