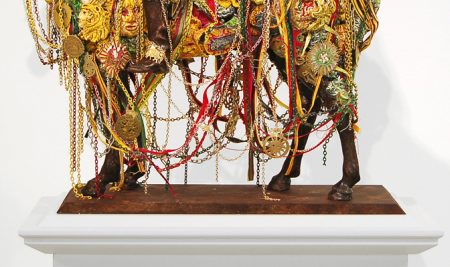 Following on from his piece For those in Peril on the Sea in 2011’s Folkestone Triennial, Hew Locke is working for the second time in an active church with a re-configuration of his piece Adrift.

He has been making or drawing boats since he first started making art. They are beautiful, a symbol of hope and protection, and a thing that can carry you to a new life.

His 16ft boat takes it’s place in the Mariner’s Chapel of All Hallows by the Tower, Byward Street, London EC3R 5BJ, alongside the other votive boats and historical memorials. Navis, the Latin word for boat, is the root-word for the nave of a church as well as for the navy.

Over the years we have been obsessed with shipping disasters ‘The Titanic, Mary Celeste or Princess Alice. This is a monument to the ‘small’ disasters, which loom large in the personal and family lives of lost sailors and passengers, but do not get the media attention. A memorial to the unknown sailor.

The piece evokes the final journey over the River Styx, Viking funeral boats, or Ancient Egyptian funerary barques. Locke also imagines this boat as having been on a long journey, lost and abandoned up a jungle river, time has passed it by and nature is slowly taking over.

Hew Locke was born in Edinburgh, grew up in in Georgetown, Guyana, returned to Britain aged 21, obtaining an M.A. from the Royal College of Art. His works are included in collections such as the Brooklyn Museum, V&A, Perez Art Museum Miami, British Museum and Henry Moore Institute

Up Hill Down Hall: An Indoor Carnival