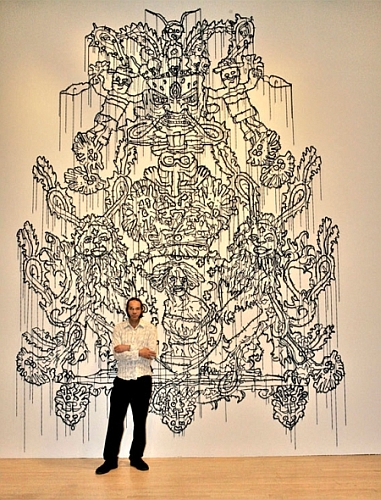 Hew Locke was born in Edinburgh in 1959. He completed his BA at Falmouth School of Art in 1988 and his MA in Sculpture at the Royal College of Art in 1994. His work is represented in many collections, including The Tate, the British Museum, Brooklyn Museum, The Government Art Collection and the Victoria and Albert Museum.

In recent years Locke has focused on his fascination and ambivalence around ideas and images of Britishness in a global context, such as the royal family. Locke explores global cultural fusions, creating complex sculptural collages with an eclectic range of objects, including mass produced toys, souvenirs and consumer detritus.

The artist’s personal history – he spent the first seven years of his life in Edinburgh before moving to the newly independent Guyana and later returning to London in the 1980s – feeds into his ongoing interest in the links between personal and national identity.

Locke has exhibited extensively within the UK, including Tate Britain as part of BAS6, V & A Museum, The New Art Gallery Walsall, The Bluecoat Gallery and the British Museum. Locke was commissioned to make a permanent installation for the New Art Exchange, Nottingham. In the US he has exhibited at the Luckman Gallery LA, Atlanta Contemporary Arts and at the Brooklyn Museum. In Autumn 2008, as well as exhibiting with Iniva at Rivington Place, Locke will present work in the group exhibition ‘Second Life’ at the Museum of Art and Design, New York.

Hew Locke was short-listed for the prestigious Fourth Plinth commission, in which a contemporary artist is selected to create a new work for display on the empty plinth outside the National Gallery in Trafalgar Square, London.