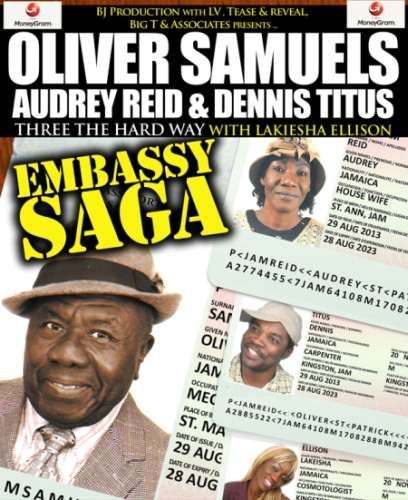 England fasten your seat belts get ready because this one will have you falling out of your seats.

The don of comedy, Jamaica’s greatest Oliver Samuels forwards again with yet another blockbuster play ‘Embassy Saga’ which he describes as “the best play that he has ever been in and will be one of the best plays to come out of Jamaica.”

Boasting a co star line up second to none with the ever popular Audrey Reid, Dennis Titus and Lakiesha Ellison.

With over 40 years at the top of the business ‘Who a di Don’ and celebrating his 65th birthday this year Oliver has written another masterpiece, and as he did with his earlier ‘mega hit’ he takes a serious issue that effect many Jamaicans and crafts it into 90 minutes of fun and laughter.

‘Embassy Saga’ is not just a drama about a family’s disagreement on whether or not to migrate, rather, it is a provocative story about the infrequently discussed sacrifices made by Jamaicans who leave the island to seek a better life, especially when children are left with an absentee parent and anyone who has seen the ‘Oliver Yuh Large’ episode where he tried to travel overseas without a visa, may be prepared for the fun in this one, but nothing can prepare them for the ending – a twist that is as shocking as it is powerful.