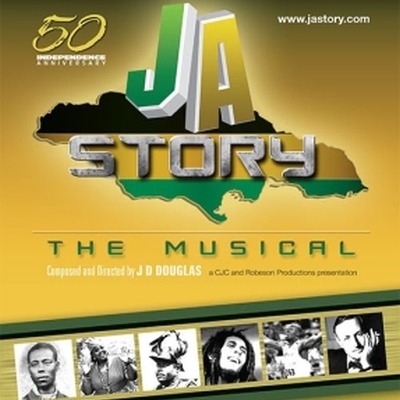 Inspired by Jamaica’s history, this musical depicts how this beloved country has influenced the world with arts, culture, entertainment, sports and much more! The list of historical characters and modern day legends include Reggae superstar Bob Marley, Marcus Garvey to Ian Fleming the creator of James Bond.

JA Story recreates key historical moments throughout the centuries, from slavery through to independence and beyond, noting the icons of those eras which is blended with a vast array musical styles that have been influenced by the muliti-cultural culture, that has made Jamaica what it is today!! The cast includes both veterans and newcomers with expertise in acting, song, dance

All of the key events in Jamaica’s history are recreated in songs, pulsating dances and exciting and informative dialogue. Jamaican Cultural icon Count Prince Miller, who had a number hit with his signature tune Mule Train, lends his considerable personality to this evocative show. JA Story has a pulsating musical canvas that includes Ska, Rock Steady, mento, dance hall Rhythm and Blues and pop.

JA Story will be at the Broadway Theatre Catford London SE6 4RU on Sunday 28 October 2012.