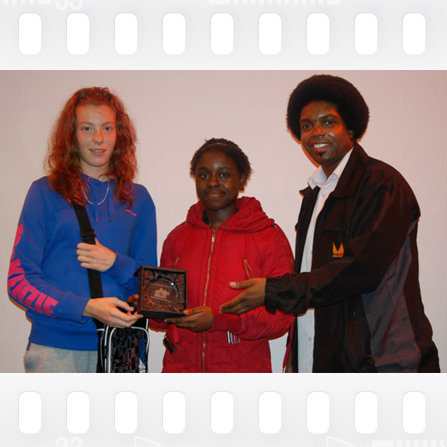 Lots of Talent at the Keep Making MOViES film festival 2010

Organised by award winning filmmaker Wayne G Saunders (BossCrowns Productions) in association with kakooi and The Nettlefold Theatre saw a host of great talent over the weekend (2nd October).

KEEP MAKING MOViES film festival. Organised by award winning filmmaker Wayne G Saunders this unique award and film festival gives upcoming people a chance to show their work, challenges filmmakers to shoot, write, direct and edit a new film in 24hs and have it shown alongside other independent films.

BossCrowns Productins CEO Wayne G Saunders was ecstatic with how the festival went and was also happy to be able to present the prestigious KEEP MAKING MOViES Award to Scacred Hearts students, Audrey Owusu (director) and Aeiysha Mcgugan (Camera Operator) who are only 13 years old but had the courage and tenacity to enter the ‘Make a film in day Challenge’ Audrey Owusu who saw the advert in local newspaper said ‘she would give it a try’. She then enlisted Aeiysha Mcgugan as her camera operator and hours later at the KEEP MAKING MOViES film festival 2010 they won. Judges said they had kept to theme and within time they will become even better filmmakers.

This is a unique award and film festival because it doesn’t just give people a chance to show their work but it also challenges filmmakers to shoot, write, direct and edit a new film in 24hs and have it shown alongside other independent films. This is the only Film festival and award show of its kind. The young winners will also have an opportunity to work and train with some of the best film practitioners over the coming year.

Jean Marie Executive Producer says “It was very pleasing to see the young girls win and very encouraging that it wasn’t one of the films school students or somebody we know, Being the first year we’ve done this it was great and Wayne put a lot of work in organising it.”

BossCrowns Productions has been nurturing and mentoring young film talent and with the KEEP MAKING MOViES film festival they continue their great work. Denise Line producer says “A lot of the funding bodies know the good work BossCrowns does but are very slow to support if any at all but we still mange to have a great a presents in everything we do”.

Inspired by Bossrowns CEO Wayne G Saunders who KEEPS on MAKING MOViES. The Film Festival / Award is to help to push and inspire other burgeoning filmmakers in promoting and distributing their work.

Wayne says, “We look forward to next years because we saw how this year award winner’s confidence went up. We have some KEEP MAKING MOViES Film Workshops to deliver through out the rest of the months and film screenings.”