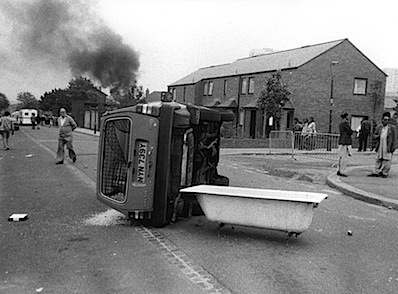 In April 2012 the Victoria and Albert Museum London, acquired four of Pogus Caesar’s limited edition black and white photographs for their permanent collection. The archival photographs printed from vintage negatives depict the 1985 Handsworth Riots which took place in Birmingham UK.

What is now known as the Handsworth Riots lasted for two days. In the aftermath, well over 1500 police officers were drafted into the area and 50 shops were either burnt or looted. Damage to property was estimated at hundreds of thousands of pounds, 35 people were injured or hospitalised, 2 people unaccounted for and tragically 2 people lost their lives. Unfortunately some memories and crimes will never be forgotten or forgiven. Even today many people still question themselves and each other “how could a tiny spark turn into such a gigantic flame”?

Birmingham film maker and photographer Pogus Caesar found himself in the centre of the riots and managed to document these images. The stark black and white photographs provide a rare, valuable and historical record of the raw emotion, heartbreak and violence that unfolded during those dark and fateful days in September 1985.

Contemporary Caribbean Art and Design at the V&A