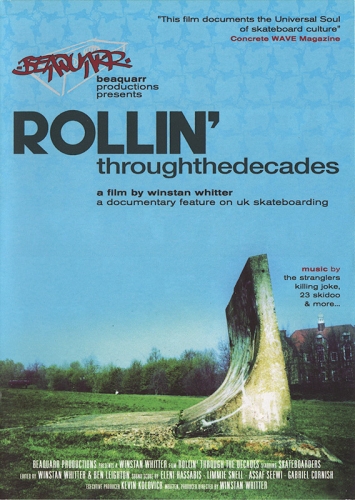 Beaquarr productions presents a documentary feature on UK Skateboarding from the 70’s until now.

Rollin’ Through the Decades encapsulates the positive atmosphere of skateboarding and shows a true picture of its influence on our time. After the first boom of the 70s, skateboarding had been ignored by society, leaving it to small groups of passionate diehards…

By the late 70s the English and the Scottish Skateboard Association began to group together what was left of the UK’s Skateboarding scene. This wave began to gain nationwide exposure and spawned the opening of new skate parks across the UK. Yet once more during the late 80s and early 90s, due to lack of organization and falling revenues, the Skateboard Associations ended, skateparks closed, magazines folded and skateboarding culture went back underground.

During the late 90s, across the Atlantic, commercial momentum was steadily building through and exemplified by televised events such as ‘The X-Games’ and the ubiquitous ‘Tony Hawk Pro Skater’ video game, which has gained commercial acceptance worldwide. Today in the UK skateboarding is big business. It is consumed everyday in the corporate non-skateboarding world of TV and Fashion advertising, yet skateboarders themselves feel left out, ironically victims of their own success.

Rollin Through The Decades

Legacy in the Dust (12A) by Winstan Whitter

From Bronze to Gold Exhibition