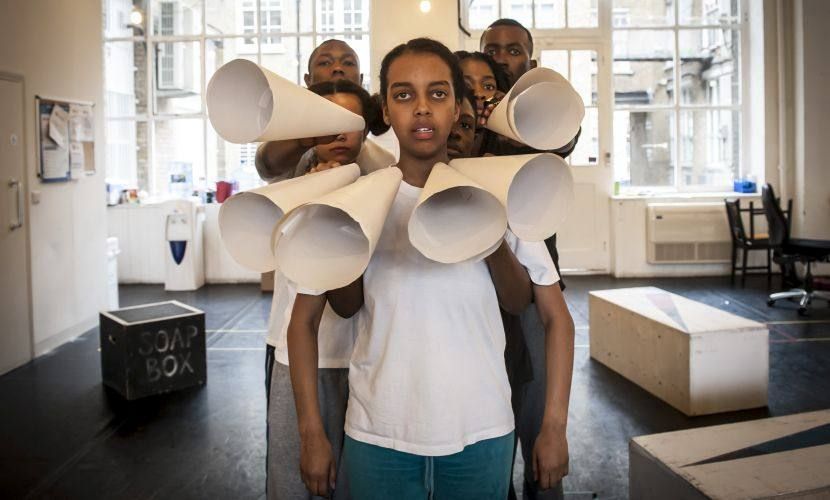 Talawa Theatre Company will present Soapbox at the Royal Central School of Speech and Drama’s Embassy Theatre from 20 – 22 August, marking the 20th year of its flagship programme TYPT.

This year’s show, Soapbox, will be directed by Christopher Simpson alongside a professional multi-disciplinary team including Movement Director Coral Messam and Gail Babb, Talawa’s Producer for Participation and Learning.

Coral Messam’s most recent theatre credits include Everyman (National Theatre), Lightning Child (Shakespeare Globe) and Feast (Young Vic). On TV and in Film Coral has performed in ‘London Road’ as well as choreographing and performing in ‘Game of Thrones’.

Over four weeks of intensive rehearsals the TYPT participants and established practitioners will work together to develop their practice, test ideas with each other and devise new ways of working. The four weeks will culminate in public performances by the TYPT Company.

“We all deserve to be heard, but what platforms can we speak from, and who will choose to hear? TYPT has always been a platform for emerging artists to grow and develop in a safe and supportive environment. It’s our privilege to provide space and access to expertise for young artists to express themselves. The results astonish me every time, and with Soapbox more than ever.” Set up in 1995, TYPT provides a truly unique stepping-stone for emerging theatre makers, including actors, stage managers and designers at the beginning of their careers. Participants’ relationship and development with Talawa does not end with the initial intensive 4-week programme, as the Company continues to offer FREE support to participants as their careers develop

Past TYPT participants have gone on to successful careers in theatre; working as performers, producers and writers for a range of organisations, including The Bush Theatre, Oval House, Theatre Centre and StoneCrabs Theatre Company. Alumni include: Femi Oguns MBE (Director of The Identity Drama School), Nonso Anozie (Disney’s ‘Cinderella’, NBC’s ‘Dracula’, HBO’s ‘Game of Thrones’ and Death of a King’s Horseman at the National Theatre); Sandra Thompson-Quartey (Artistic Director of Writers Avenue Theatre Company), Michaela Coel (Chewing Gum Dreams at the National Theatre) and Shanika Warren-Markland (films ‘Gone too Far’, ‘Adulthood’, ‘4321’ and ‘Victim’).

“I joined TYPT at 17. I always knew I wanted to become an actor but I was uncertain how I was to go about it … The TYPT experience was incredible – uplifting, inspiring and supportive. It was the gateway that led to the career I now enjoy, working with film, television and theatre makers all over the world.” Nonso Anozie, past TYPT participant and TYPT Patron

NOTES TO EDITORS:
Talawa Theatre Company is the UK’s primary black-led theatre company. Led by Artistic Director Michael Buffong Talawa Theatre Company creates work informed by the wealth and diversity of the Black British experience, invests in talent, builds audiences and inspires dialogue with and within communities across Britain, enriching the cultural life of the UK.

The Letter : To Be Or To MBE