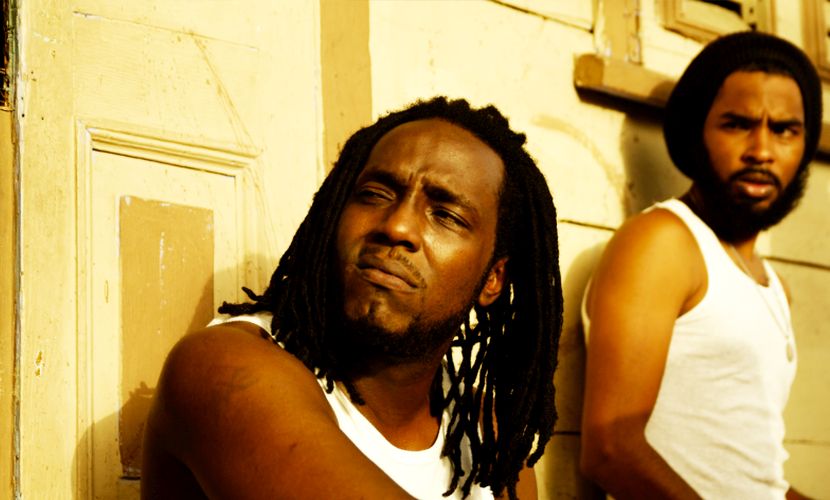 Widely touted as Trinidad’s answer to City of God as well as receiving comparisons to iconic Jamaican film The Harder They Come and Amores Perros, Damian Marcano’s gritty drama plunges the viewer right into the heart of the Port of Spain’s illicit world of crime. Winning the Curaçao International Film Festival Rotterdam’s Yellow Robin Award and boasting a 100% all – Trinidadian cast, God Loves the Fighter tells the story of several characters who for all their attempts to avoid lives of crime, are eventually forced to do so in order to survive.

In this raw, realistic take on life in the east of Port of Spain, Trinidad – murder capital of the Caribbean, Young Charlie wants to do the right thing, but ha s to try and survive this concrete jungle. On one fateful night, Good and Evil collide, drawing in mothers, brothers, kids, gangsters and gunslingers from all corners of this renowned crime hotspot.

Port of Spain in Trinidad is the murder capital of the Caribbean. Someone is murdered every 17 hours, and most of the victims are under 25. God Loves the Fighter realistically portrays what it is like to live in Laventille, one of the most dangerous slums in the world.

Although the subject and style are reminiscent of other slum films such as City of God and Slumdog Millionaire, the grim narrative and the dub reggae soundtrack by Freetown Collective, Q. Major and Redman give the film its own unmistakable style

Homeless street poet King Curtis is the prophetic, omniscient narrator. He tells the raw, tragic story of Charlie, a young man growing up in Laventille. What he wants most is a good life with an honest job, but his hopeless circumstances nevertheless lead him into a life of crime. When prostitute Dinah crosses his path and desperately needs help, Charlie reaches a crossroads in his life.

“A fantastic example of the fresh creativity that can come from a place that hasn’t been seen on screen enough.” – Indiewire

"A lot of West Indian people in America, when they see a Caribbean film, t hey feel it’s not authentic. They feel it’ s watered down. As someone who had left Trinidad in their youth, I said to myself "okay, I don’t want it to be anything like that". I want it to be one hundred percent raw. I wanted to examine these characters as physical specimens, to shoot the local body in a different way. For example, in Trinidad we ‘lime’ – I don’t know if you know that term over there – but we lime a lot and liming is just a couple of people who get together, have some drinks, they smoke, do whatever, just chat. So, in liming, I think that is what kept the authenticity of the flow of the story. It allows the audience to be right there at this lime, in this authentic moment. This was fortunate for me, because I am just writing what I know. Write what you know, shoot what you know, then as an independent filmmaker you get to tell an unpretentious story that can seem very real to a lot of people.

"Whatever the political message is that comes across in this film, which are my thoughts and my words, I hope they at least inspire people to say we have to start taking back from life. My political view isn’t so much Democratic or Republican or this party or that, but black people are getting killed left and right, and sometimes when people say ‘let’s take something back’ it’s when their politics turn into anger and then they say "okay, I’m gonna’ take it back with violence". Film, in the same way discussion and allowing people to hear each other’s views, connects us all in a certain way, without the need for violence ." UK RELEASE: Catch it at the East End Film Festival and online Exclusively at Filmdoo Filmdoo FROM July 7th