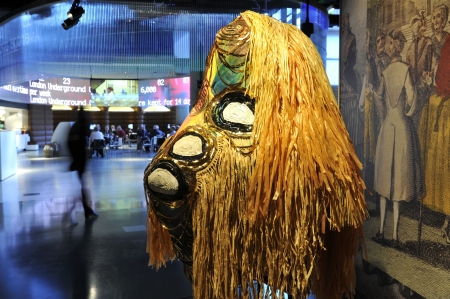 Streets of Gold Exhibition at the Museum of London

Streets of Gold reminds us of the positive contribution that migration makes, and has always made, to London. The display is made up of four artworks. All the pieces are inspired by and physically include objects in the Museum’s collection. They interweave London’s rich cultural heritage with the histories and practice of five young artists from across the globe.

• redefinition by James Voller (New Zealand), an exploration of how cities rebuild themselves after disasters, featuring original images of the Blitz alongside the words of Christchurch earthquake victims, as spoken by those in the Square Mile;

• see no evil, hear no evil, speak no evil by Alberta Whittle (Barbados/Scotland), considering the misappropriation of images of transatlantic slavery, and the relationship between souvenirs and more personal travel mementoes; You can listen to Alberta’s story here:

• between water and wind by Golbanou Moghaddas (Iran): a large-scale wall installation which intertwines a print from the Museum’s collection among new images and scripts conveying the transience of the migrant experience;

• waste of space by Bojana Jankovic (Serbia) and Dana Olarescu (Romania), in which playscripts from the Museum’s ephemera store are taken out for a “breath of fresh air”.

Daniel Saul, the Creative Director of Streets of Gold, said: “The display is a reminder that London has been built on successive dreams of newcomers, and that its riches can be discovered, all around us.”

Francis Marshall, Museum of London Curator, said: “London has always been a magnet for young artists. This show is an exciting opportunity for the five participants to reflect on London’s history and take a fresh look at the Museum’s collections.”

Alberta Whittle is an artist from Barbados, who migrated to the UK. Her piece is a mixed media installation called ‘See no evil, hear no evil, speak no evil’. It considers the misappropriation of images of transatlantic slavery, and the relationship between souvenirs and more personal travel mementoes. Her installation allows the public to participate with her work by responding to the question ‘when does london become home’. Responses to this question are written on postcards that she designed and are displayed as part of the exhibition.

motiroti are asking Londoners to take part in the exhibition and help Alberta Whittle to form part of her artwork. To take part, answer the question “when does London become home for you?” in 2-3 sentences, by posting to @motiroti on twitter or on FaceBook.

Streets of Gold is on display at the Museum of London from the 20 January to the 15 April 2012.