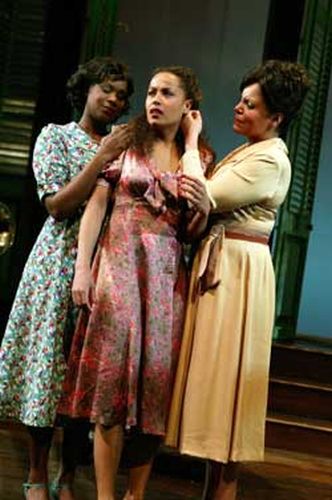 One of Chekhov’s greatest plays, ‘Three Sisters’ has been reworked by award-winning writer Mustapha Matura for Eclipse Theatre.

Set in colonial Trinidad 1941. Three sisters live a privileged life in Port of Spain with their unworldly brother and his domineering wife, occupying their lives with empty marriages and indiscreet liaisons.

They dream of returning home to their adopted country England and the spires of Cambridge where they spent their cosmopolitan youth. But these ambitions of emigrating soon crumble as WWII escalates and the Trinidadian army are called to serve King, Country and Empire.

Mustapha Matura, one of the most prolific and lyrical African- Caribbean playwrights of his generation, his work includes Playboy Of The West Indies, As Time Goes By and the successful television series No Problem! Paulette Randall is one of the most exciting directors of her generation, previous credits include The Amen Corner, Blues For Mister Charlie and King Hedley II. Television credits include Kerching! and The Crouches.

Three Sisters is Eclipse Theatre’s fourth production. An initiative to develop the national profile of Black middle scale theatre, their previous critically acclaimed productions are Moon On A Rainbow Shawl (2003), Mother Courage And Her Children (2004) and Little Sweet Thing (2005).

To find out more about Eclipse Theatre please go to eclipsetheatre.org.uk