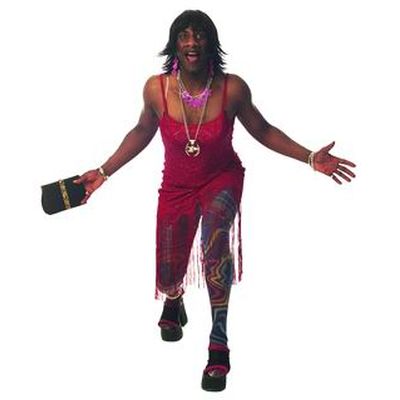 The ultimate variety talent show is back! It aims to launch the career of more young hopefuls. The show’s host is dancehall Queen ‘Dibbi’, the alias name of Choice Fm DJ, Wayne Rollins.

The grand final on the 17th March, will see six of the best from the previous weeks, battle it out for an amazing career development trip to Jamaica.

Fill us in about the new show?

It’s a talent quest for young artist’s, singer’s and sometimes we have comedian’s, cutting their teeth for the first time on the big stage. But, it is predominantly a talent quest for solo artist’s and groups. It is a full on variety show. It’s very much like the X Factor, without Simon Cowel. The judge’s are Dibbi and other dignitaries of the theatre. The audience don’t get to decide people’s fate. They used to boo, that can demoralise some of the artist’s. The comedian’s don’t get judged. We bring in comedian’s, that probably wouldn’t have had the chance to get on stage, for a while yet.

Dibbi is the dancehall Bajan Queen, she is extravert and man hungry. She’s one of those women who says things by mistake and act’s naive, well, she plays on that. She ain’t naive, she’s got a lethal tongue. She knows exactly what she is saying.

I prefer comedic performances, instead of stand-up. It’s more entertaining, dressing up as a woman, means I can mess with men and women and get a laugh out of both.

When is Dibbi going to revamp her hair colour?

I changed it for two years and now I’ve gone back to blonde. It was burgundy, flame red, I had a lot of complaints. ‘What happened to Dibbi’s natural wig?’, I asked my daughter and she said everyone likes you blonde. So I went back.

It seems to always be the same comedian’s on bills; Richard Blackwood, Ninia Benjamin, Rudi Lickwood, is the comedy scene stilted?

Well, that’s what 291 is all about. Even though comedian’s are not part of the talent quest, it is a platform for comedians too. You get promoters that go there, and that leads them to get noticed too. Back in the day when I started, there were more black comedy clubs, I don’t like saying ‘black’, but we have to these days. Comedy for me has no colour, if you are black or white and you make me laugh, I’ll laugh. We used to have a lot more stage for young comedians coming out.

Black comedy was so rife, for people to get a gig, they have to go on the mainstream, with the white man. What I can’t understand is why the white man can’t understand our humour. We have to bow down to their way of thinking to get in their world. What I am trying to do is keep my style and my humour going, for them to understand me for who I am in this country, I’m born it. Hackney Empire also does lots of other stuff, like Young Acts Of The Year.

Are young people genuinely interested in comedy, or has interest completely shifted to music?

It’s easier to sing or rap, you don’t have to really gauge the audience much. When you go on stage and you tell a joke that’s it. You’ve got to do five six jokes within that timeslot. You’ve got four minutes to rap, nobody troubles you, then you gauge how the audience perceived you by the end of your rap. Nine out of ten times, you will get a very good response, unless you are rapping utter crap. It is one of the easiest safest forms of entertainment.

American comedian’s such as Chris Rock and Bernie Mac command more respect in the UK, why?

They don’t see us in the States, I have never performed in America. If I was to ever go there, I would need go for a week in advance, so that I can get a taste of how they live. I would watch a bit of their TV, then you can incorporate a bit of their life. You’ve got a diversity of islands living out there. It will be harder for some British comedian’s to go out there. American’s may laugh at everything, but not everything makes them laugh.

What other projects are you involved in?

I am planning my one-man show at Hackney Empire, not sure when that is going to be. Also, we are planning to get back into channel 4, they’re interested. I am still tapping on that door.

In the Land of the Shak Shak Tree

Caribbean Mothers – Identity and experience in the UK