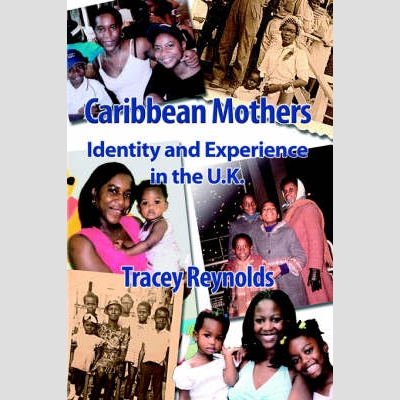 Jean Otalor talks to Tracey Reynolds about her new book.

Caribbean Mothers – Identity and experience in the UK, available from all good bookshops.

It’s a very taboo subject, and had been swept under the carpet, but the black babymother issue has re-surfaced, in the form of a book. At a time when British women of Caribbean and African backgrounds are achieving educational and employment success beyond that of earlier generations.

The mothers describe their experience in their own words. In the study, all mothers stated that they had encountered racism in their everyday lives. Author Dr Tracey Reynolds, senior researcher and lecturer at London South Bank University, spoke to Jean Otalor about her personal involvement compiling it.

Why write a book about Caribbean mothers in the UK?

‘In the mid to late 1990’s there was a lot of stuff in the media about black mothers, particularly black lone-mothers and it was very negative, there were a lot of stereotypes. There were many discussions about the black mother, the superwoman. The superwoman who trapped black men to have children, but not want him. Also, a lot of discussion about the breakdown of the male female relationship within black families and how they resulted in children underachieving at school and the black family being dysfunctional. Reading a lot of these things in the newspaper, I realised that there wasn’t many people that went and spoke to black mothers and black families about their experiences. From my experiences and from people I know, it didn’t actually match the newspapers. I wanted to challenge the stereotypes that are out there and find out what black mothers are actually saying about their stereotypes. There isn’t one book in this country that actually looks at black mothers in Britain. I thought there would be, there is a lot of stuff coming from America.’

How did you decide who you were going to speak to?

‘First of all I wanted to get a range of mothers, there is always this perception that black mothers are all the same. I wanted a range of mothers of different age groups, because I wanted to look at generation differences. I interviewed some mothers as young as 18, to as old as 81. The older mothers were even grandmothers. My argument is, you don’t stop being a mother when your child reaches 18 or 21. I also wanted to look at women across different social classes, so I looked at mothers who were on very low incomes and in deprived neighbourhoods, then I looked at mothers who were on high income, very affluent, corporate middle class. Then, I looked at mothers in female headed house holds, single-parents mothers who were married and mothers who were living with their partners because I wanted to get across that diversity which is often ignored. The young people having children, use this as an opportunity to succeed in life. That motivated them to go back to college and find employment, which would allow them to do day release. That way they could get their education, so that they could progress in life. They turned having a child at a young age to their advantage, to motivate themselves to achieve.’

Why do Caribbean mothers feel miss-understood?

‘Because there is little information about them. There is a lot of research about the black community in general. No one has actually spoken to them, everyone has been writing about them. I used friends, higher education, colleges and went to some churches to get some of the older mothers, people referred me on to different people.’

Did the women talk openly to you?

‘I was pleasantly surprised, although the older mothers were very suspicious of me, I had to take my time and ease myself into the interview. Some took 5-6 hours, I would spend half the day with them while they were doing their daily routine including picking up their kids from school. I am not a mother, but being a black woman they could talk about racism, because there was this perception that as a black woman growing up in Britain myself, I would have experienced similar experiences and know what racism is. It was easy to open up to me. Also, there was a feeling of at last someone is actually coming to speak to us about our experiences. In terms of relationships with men, I think in general their relationships with men dominate their conversations, you get a group of women together at some stage men will come up usually. I think they wanted to talk about black men. There are a lot of miss-understanding about the relationship. Either about the relationship that’s broken down or there are not eligible good black men around. It was an opportunity to talk about what is actually going on in their relationship and what is going on in other relationships in the black community.’

‘I wouldn’t use the word bitter. I think the women where the children’s father is not in their life talk about how it effects them and their relationship. But, I think it is important to point out that even if the men where not in their life, they still drew upon the males family for support, so I think that’s really important. There was a contradiction about what some of the women were saying. There was a public debate about black men being irresponsible and being no good, but when you asked them about their personal experience they would say, ‘actually my father is or my partner is quite good’. On one hand they were supporting the public debate, but when asked about their personal experience they were saying something completely opposite. The other thing to add is even though some of the men are not living in the household, it didn’t mean they were completely absent from the children’s life.

Has the image of Caribbean women improved?

‘I don’t think the image of Caribbean woman has improved, I just think we have become invisible again, there was a stage when people were talking about us, it’s like we are not trendy anymore, there’s other groups to look at. I think there is still the image that black woman are becoming too successful and out performing our men, or they are still trying to trap their men to have a baby. Not because they want a council flat, but because they want a baby, but not the man. But there is still these sort of images that black women have become very hard, very bitter.

We live in a white society, if you spoke to a south Asian mother they would have different issues. We can’t get away from the fact that there is racism. I don’t just mean name calling racism, I mean even though black women work longer hours, the chances are they get paid less, proportionally to white mothers. The chances are, they are in a lower state of employment and could have the same qualifications as well, that’s a product of racism, institutional racism. And that’s going to impact on how they raise their children. It’s quite a complex matter. There is a racial disadvantage, which white mothers don’t have to deal with. They are coming from a position of privilege, based on race and we are coming from a position of disadvantage. So that means there is going to be differences on how we raise our children.’

Your book states identity is shaped by racial other and minority status in the UK. How did that arise?

‘You always had to be three times better then a white person at school, because you were coming from a position of disadvantage so you wasn’t trying to be on the same level, you had to be better to get the same. That’s a concrete example of how racism is an important part of mothering and your child. When you are growing up you were told that you were going to experience racism, but you should never let that stop you doing what you had to do. The mothers promote a positive black identity, some send their children to black supplementary schools, buy black toys, have black cultured artefacts in their home, generally things that will celebrate a black positive identity. Because they know there isn’t much mainstream.’

Was it difficult as a non-mother speaking to women about being a mother? ‘At the time it wasn’t, but looking back, I wonder, is there things they would have told me differently or things they didn’t explain in detail to me. Hopefully, if I do have children I would have looked back and it would have made a big difference. I think the fact that we both share the Caribbean heritage, we could relate.’

Lastly, what were the most common stereotypes you found?

‘The common one I found was that black woman are work horses, a lot is put on your shoulders, and they are the mules of the world. There’s this perception that they are really strong and we can take anything. We just get dumped on, everything gets dumped on our shoulders and take on all the problems of the world. At work you are over worked, at home you have to take on more responsibilities then you should. No one recognises the toll it has taken on black mothers, the emotional toll, black woman have high blood pressure, hypertension, there are a lot of difficult illnesses, emotional and psychological. It’s quite damaging, everybody needs help.

This book steers away from feeding into the stereotypes and challenge’s it. Looking at what the mothers are doing, strategy’s they are employing in their life’s to deal with this and how they to try and juggle everything.’

Caribbean Mothers: Identity and experience in the UK by Dr Tracey Reynolds available from www.tufnellpress.co.uk , www.amazon.co.uk and all good bookshops priced at £14.95