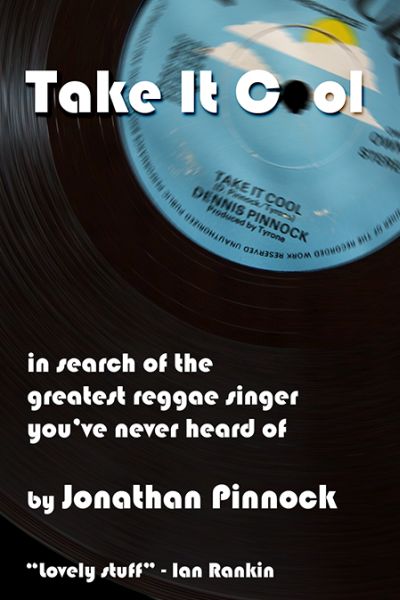 In the witty yet socially-conscious style of Dave Gorman and Tony Hawkes, Jonathan Pinnock takes readers on a music-filled journey as he researches a little-known yet prolific West Indian reggae singer with his own strange surname. There’s no other book quite like this on the market; fusing a whimsical yet insightful story of family lineage with a bold exploration of reggae culture and music.

While Smiths and Williams are everywhere, you just don’t meet many Pinnocks. Having always been conscious of his unlikely surname, writer Jonathan Pinnock was instantly intrigued to discover that a West Indian reggae singer shared his beloved last name. Embarking on a journey to discover the man behind the name and music, Jonathan came closer to historical racial truths than he could have ever imaged. His new book takes readers on this tumultuous journey, with plenty of reggae music to match.

Everything is exposed in ‘Take it Cool’, which will delight anyone with an interest in reggae music, Jamaican culture or family history. Told with the wit and whim that has become a hallmark of Pinnock’s writing style, readers will be filled with laughter and insight as they discover just how small the world really is.

Synopsis:
If you’re born with the name Pinnock, you are just two consonants away from disaster, and that proximity pretty much wipes out any chance you have of being cool. Jonathan Pinnock knows this. He has never been cool. The word “Pinnock” is printed through his every bone like Brighton rock.

But then one day he finds out about Dennis Pinnock. That’s Dennis Pinnock, the reggae singer. The reggae singer who recorded over twenty singles on a dozen different labels but never made it to a full-length album, despite working with some of the biggest names in black British music.

So who is this Dennis Pinnock guy? Is he still alive? Is he a big star somewhere? What is a black man of West Indian origin doing with that daft surname? And what in God’s name is a white, middle-class, middle-aged bloke doing on a quest like this anyway?

In the course of the search for Dennis Pinnock, Jonathan digs up some long-forgotten cuts of reggae music, tries to re-inter one or two others, marvels at some unfeasibly shiny suits and encounters some unpalatable truths about how his surname might have crossed the race boundary.

"I’ll admit, this wasn’t one’s normal attempt to research the history and prevalence of their surname. Who would have thought ‘Pinnock’ would lead to hours of indulgence in Reggae. While the two don’t naturally meld; it’s actually a match made in heaven!” admits Pinnock.

"Of course, I discovered some stark and disturbing truths along the way. We all have skeletons in our closet – and in my case I thrust the doors wide open and invite readers to step inside."

Reviews for the novel have been extremely positive. The legendary Ian Rankin comments, "Lovely Stuff".

Peter Sutton adds, "Pinnock writes with verve and humour and gently leads you through his somewhat odd quest, blending information about the records themselves (all singles), the musicians, the producers, the reggae scene and the history of the Pinnocks in Jamaica. This is recommended for fans of UK reggae, music lovers, record collectors, family history aficionados and people interested in Jamaican history and the history of slavery."

Those wanting a side-splitting read are urged to purchase their copies as soon as possible.

"Any mention of reggae calls to mind the Conservative politician several decades ago who attempted to boost his street cred by talking about his love of it, but who scuppered all cred by pronouncing it ‘Reggie’. I did at least know how to pronounce it, but not much more. My point is that this book is not just for reggae buffs (if that is the term). It is intriguing, unusual and very, very funny. Apart from the main theme, there are riffs on the coolness – or otherwise – of the oboe, a cemetery in Portishead, and the graveyard of Stevenage. Even the secondary theme – the worrying possibility of ancestral involvement in the slave trade – while by no means flippant – still doesn’t dampen the wit. And there’s a happy ending (and who knows, maybe this book will do for Dennis what ‘Searching For Sugarman’ did for Rodriguez). I honestly can’t think of a better, more off-beat summer read, with maybe ‘Total Reggae Summer Vibes’ in the background, and a long, cool drink. ‘Lovely stuff’."
David Rose, Author

Jonathan Pinnock is the author of Mrs Darcy versus the Aliens (Proxima Books, September 2011), and the Scott Prize-winning short story collection Dot Dash (Salt Publishing, November 2012). Dot Dash was favourably reviewed in the Independent on Sunday and was longlisted for both the 2013 Edge Hill Prize and the 2013 Frank O’Connor International Short Story Award. He is also the author of the non-fiction work Professional DCOM Application Development (Wrox Press) and co-author of a further twelve books on computer software development. Three of these have been cited in scientific papers, and three chapters of Professional DCOM Application Development have also been re-published by Microsoft Developer Network.