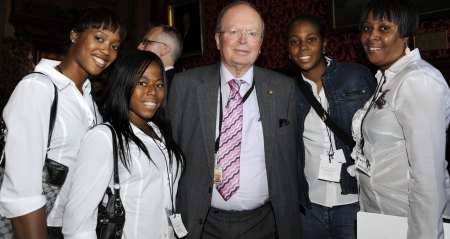 A group of young people with sickle cell are seeking to raise awareness and understanding of the condition and highlight its devastating effects on the lives of those who have it. As part of this mission, Broken Silence are urging the Government to improve the lives of people living with sickle cell disease by implementing the Standards and Guidance on Transcranial Doppler Scanning for Children with Sickle Cell Disease.

Sickle cell disease (SCD) is a genetic blood disorder affecting the red blood cells, and it is mainly found in people of black and ethnic minorities. It is estimated that in the UK, 12,500 people have SCD. The condition can cause severe anaemia, damage to major organs and infections. Sickle cell is caused by inherited genes that create defective blood cells. People with sickle cell have sickle-shaped blood cells that can build up and cause blockages in small blood vessels, causing severe pain known as sickle cell crisis. An additional concern for sufferers is their increased risk of stroke since approximately 10% of all children with SCD will suffer stroke by adulthood.

Broken Silence wish to highlight that stroke can in fact be partly preventable if patients are screened through Transcrannial Doppler (TCD) Scanning. The Stroke Prevention Trial or ‘STOP’ study showed that by giving children with abnormal TCD scans regular blood transfusions, their risk of stroke was reduced by 90%.

The Transcronial Doppler Scanning for Children with Sickle Cell Disease Standards and Guidance, published in March 2009 went some way in addressing the issue, Diane Abbott MP, Chair of the All Party Parliamentary Group on Sickle Cell and Thalassaemia said of the guidelines, “Good quality TCD scanning has the potential to have a major impact on effectively identifying those children most at risk of stroke. With early intervention and preventative action it will be possible to significantly reduce the incidence of strokes among this at-risk group and, ultimately save lives.”

Broken Silence have been a key driving force in pushing for greater access to TCD scanning to identify risk patients at risk of stroke and the group are now urging the government to oversee the implementation of the new guidance.

Cherelle Augustine, founding member of Broken Silence was diagnosed with SCD at six weeks old and has subsequently suffered from strokes herself said, “Sickle cell disease is a very difficult and complex illness to live with – we just ask for adequate scanning and treatment.” Lord Smith of Clifton, who was himself a trustee of the Stroke Association, first met with Broken Silence in 2008 and champions the work they have done to date on highlighting the need for TCD scanning:

“Having experienced a stroke myself, I know the effect it can have on your everyday life. It’s distressing to think of young people with sickle cell disease having a stoke, particularly if the risk can be reduced by receiving the right treatment. I was pleased to raise the issue of access to TCD scans in parliament last year, and hope that these new standards will be implemented as quickly as possible.”

Dr Lorna Bennett, Trustee of the Sickle Cell Society said: “Patients with sickle cell tell us they are struggling to pay for their prescriptions. Patients believe that this is discriminatory and it is time they got a fair deal.”

The Prescription Charges Review will consider how to implement the Government’s commitment to exempt patients with long term conditions from prescription charges over the next few years following the exemption for cancer patients.

Broken Silence attended the All-Party Parliamentary Group on Sickle Cell and Thalassaemia on Tuesday 14th July and support the group in giving a dynamic push for the well being of people suffering from sickle cell.