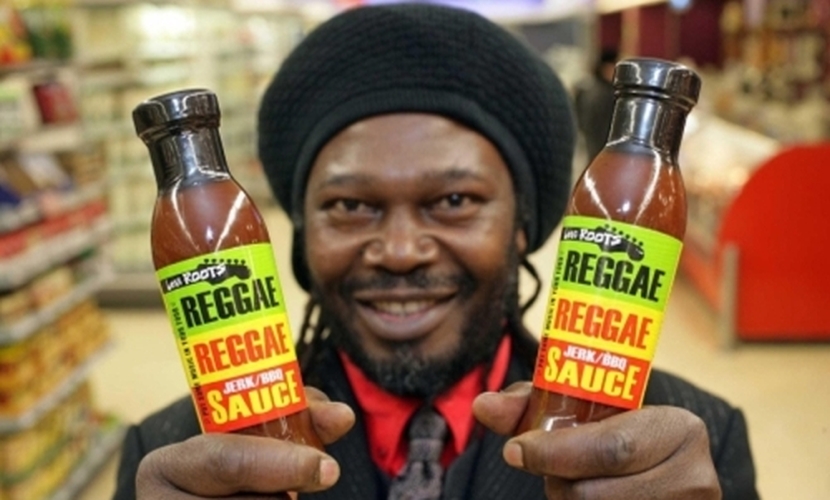 Levi Roots, who sung his way to a £50,000 investment on BBC2’s Dragon’s Den TV show, has even more reason to be singing today – after landing a nationwide deal to supply his Reggae Reggae Sauce exclusively to Sainsbury’s.

Just four weeks ago Levi was cooking up batches of the sauce – a spicy jerk/BBQ sauce based on Levi’s secret family recipe – in the kitchen of his Brixton home. But today, following a deal clinched with the help of Peter Jones, one of his investors on the show, the sauce is available at 607 Sainsbury’s stores.

Furthermore, Levi’s “Reggae Reggae Sauce” song, which made him an instant hit with both the Dragon’s and TV viewers, will also go on sale at Sainsbury’s, from Monday 12th March.

In the Dragon’s Den, Levi eventually won investment from Peter and fellow judge Richard Farley, who offered £25,000 each to make up the £50,000 he was looking for, in return for a 40 per cent stake in his company.

Sainsbury’s, who will sell the Reggae Reggae Sauce exclusively for six months, has been working round the clock with Levi to get his product on shelves as quickly as possible without compromising taste or quality. The sauce, which can be used as a marinade for jerk chicken and BBQs with other meats or vegetables, as an accompaniment on the side, and even as a dip on its own, will cost £1.49.

“I cannot believe what has happened to me since appearing on the show, it’s been amazing and literally life changing. My phone has not stopped and it seems everybody everywhere wants a bottle of my sauce,” said Levi, a critically acclaimed reggae singer/songwriter, who was. nominated for a MOBO award in 1998

Since the programme, Levi and his family have been inundated with thousands of orders for the sauce, which until now sold via his website and at the annual Notting Hill Carnival.

He added: “The deal with Sainsbury’s is a dream come true for me and my family, and seeing the sauce on the supermarket shelves is an emotional but enjoyable moment. Working with Peter has been fantastic, and I am grateful for his support and for introducing me to his business contacts.”

Entrepreneur and Dragon’s Den judge Peter said: “Levi is a great guy and he’s created a great product which he is passionate about. It’s a pleasure working with him and I am sure this deal with Sainsbury’s will be the first of many fantastic milestones on the way to business success and making his dreams a reality.”

Sainsbury’s Sauce Buyer Nick Paddison said: “We were hugely impressed with Levi’s product and it fits perfectly with our ethos to encourage customers to try something new and our desire to help nurture smaller, niche suppliers, so we have pulled out all the stops to make it available in stores as quickly as possible. Having tasted it, I think our customers will love it.”

Levi’s company, Roots Reggae Reggae Limited, has granted a licence to G. Costa & Company in Gwent, South Wales, to manufacture the product on his behalf in order to fulfill his Sainsbury’s order – which runs to tens of thousands of bottles. Levi has overseen the whole process with the G. Costa team in order to protect his secret recipe, which has been handed down from generation to generation and was entrusted to him by his late Jamaican grandmother, Miriam.