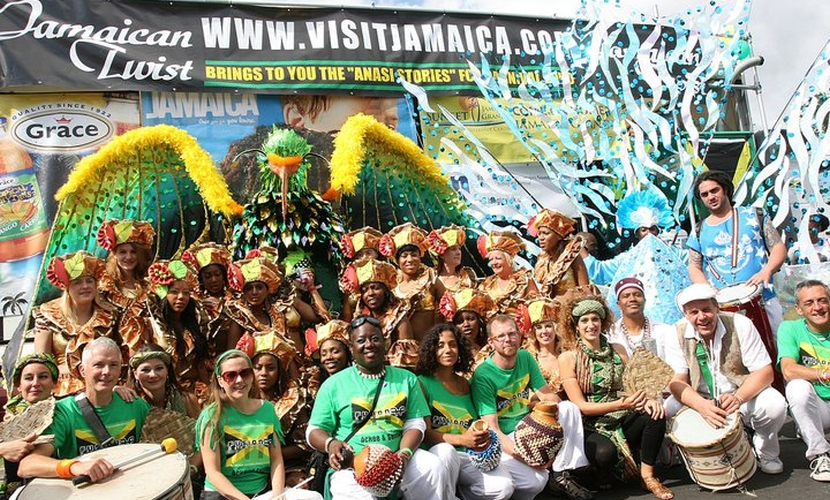 Jamaica Tourist Board bought the rhythms and flavours of Jamaica to the streets of London today after participating in Notting Hill Carnival, the largest festival of its kind in Europe.

Spectators turned out in their thousands to cheer the tourist board-sponsored Jamaican Twist band as it paraded through west London, with reggae beats and live MCs getting the crowds jumping and dancing in the streets.
‘Ackee and Saltfish’ was the theme of this year’s carnival band, with costumed performers illustrating one of Jamaica’s favourite dishes. The Carnival King wore a spectacular Saltfish costume in shimmering blue, surrounded by dozens of female dancers in gold Ackee costumes. The costumed performers included eight finalists from the Miss Jamaica UK pageant. The Doctor Bird and Anansi were other characters brought to life by Carnival costumes.

The costume section was followed by a T-shirt band of around 40 men, women and children in customised Jamaican clothing. As a reflection of the national motto ‘Out of many, one people’, participation was open to the public this year and the T-shirt band included people from the UK, South Africa, Australia and the USA as well as Jamaicans and British-born Jamaicans.

Five travel agents also joined the band after winning places in a competition run by Jamaica Tourist Board in London.

The ‘twist’ in the Jamaican Carnival band was a collection of 40 Brazilian drummers and samba dancers, who completed the parade line-up with their electrifying beats and co-ordinating outfits of green and gold.
Notting Hill Carnival is the UK’s biggest celebration of Caribbean culture, consisting of twenty miles of vibrant colourful costumes and floats, over 40 static sound systems, hundreds of Caribbean food stalls, over 40,000 volunteers and over one million revellers. The annual Carnival has been running for over 40 years, taking place over the final Sunday and Monday in August.

As well as the Jamaican Twist band, which paraded the streets with floats from other Caribbean islands, Jamaica was represented by The Jolly Boys who gave a live performance to a rapturous reception. The Jolly Boys have proved to be a huge success in the UK with their modern mento covers of popular songs including Amy Winehouse’s Rehab, Johnny Cash’s Ring of Fire and Iggy Pop’s The Passenger. The old-timers from Port Antonio are touring the UK ahead of their Great Expectation album launch.

Celebrity chef Levi Roots was also at Carnival, where he first made a name for his Reggae Reggae sauce. Hungry members of the public lined up for a taste of his Jamaican jerk and were also entertained by musical interludes from Roots.

Jamaican Twist has just announced that its theme for 2011 will be Bob Marley – The King of Reggae Music, commemorating 30 years since the legend’s death. In 2012, the band will celebrate 50 years of Jamaica’s Independence.