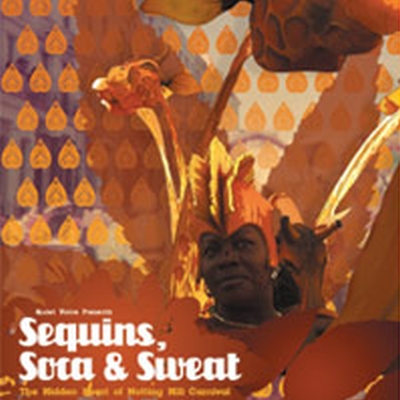 Sequins, Soca and Sweat, a documentary uncovering the passion and labour woven into the history behind the art form of ‘Mas’ (the costumes worn at Carnival).

With the history of ‘Mas’ in the UK dating back since 1973, Sequins, Soca and Sweat is the last in the series of films commissioned and funded by Arts Council England’s Grants for the Arts programme, to explore the creativity and stunning spectacle of Notting Hill Carnival.

In a nostalgic telling of a family entrenched in the history of Carnival in Britain and the evolution of a tradition inspired by the Trinidad carnival, Sequins, Soca and Sweat follows the story of ‘Mas’ pioneer, Lawrence Noel and his son, as they come to terms with changing techniques and inter-generational differences in the lead up to Europe’s largest street festival.

South London filmmaker Stephen Rudder, has received much critical recognition for his work. His last short film, Ruby’s Slippers was a finalist in the BBC Talent film competition and was screened on the BBC Choice Short Cuts series, as well as at the Hollywood Black Film Festival.

Stephen Rudder says, “When I was filming at ‘Mas’ at the 2003 Carnival, I saw a young boy in costume with a horn in one hand and the other around the shoulder of his grandmother as they danced together. This tradition should be preserved.”

“The months of creative preparation for Notting Hill Carnival are largely a hidden activity. For many it is a labour of love. This project was funded by Arts Council London in recognition of these unseen hours of planning, design, technical skill and sheer creative passion.”

Black Heroes in the Hall of Fame