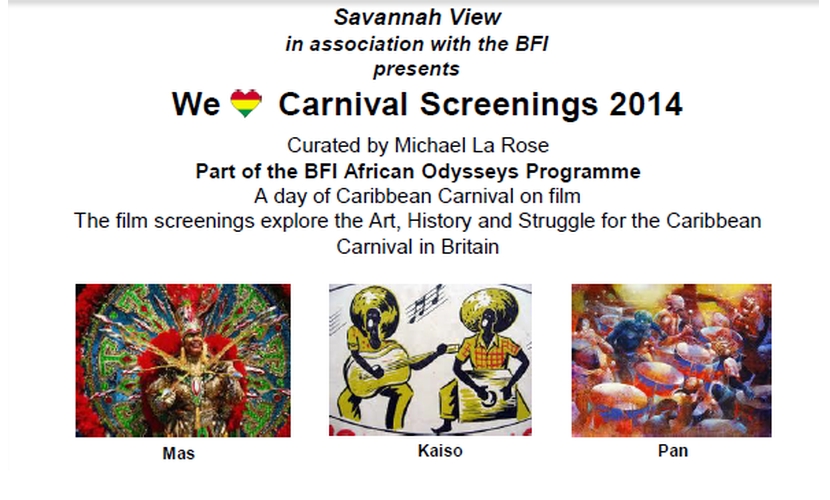 We Love Carnival Screenings 2014 provides a dazzling showcase of the Caribbean carnival in Britain.

Savannah View director Michael La Rose curates a weekend of Caribbean Carnival on film as part of the BFI African Odysseys Programme. The second year of the groundbreaking film screening event explores the art, history and struggle for the Caribbean Carnival in Britain.

The films to be shown include the documentary ‘Looking For Claudia Jones’ in celebration of the 50th anniversary of the death of this important cultural and political activist. Claudia Jones’ courageous work is explored including her contribution to establishing the Caribbean Carnival in Britain.

The BBC’s ‘Summer 76 Carnival’ records the mas’, issues, individuals and build up to the explosive Carnival which propelled the Notting Hill Carnival to global notoriety.

Finally there is the beautifully musical 1991 film by Dalton Narine ‘Panorama; Festival of the Pans part1’ which explains the steelband art and the unique musical competition at the heart of the Trinidad Carnival.

The films will be followed by interactive panel discussions with panelists that include Alex Pascal, Nia Reynolds, Donald Hinds, Anthony Perry, Dalton Narine, Leslie Palmer and Corinne Skinner –Carter and others.

Screenings start at 11am until 5pm with a lunch intermission. A fantastic opportunity to understand the hidden history and art of the Caribbean Carnival in Britain.