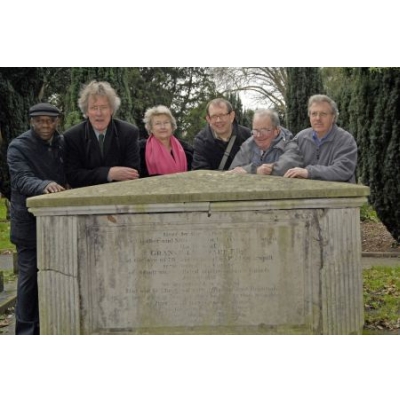 Granville Sharp, the man recognised in his day as the father of the British anti-slavery movement, will be remembered in readings at the service. Sharp, who lived in Fulham and whose tomb is in All Saints churchyard, has been overshadowed in the public mind by William Wilberforce, the MP who pushed the landmark abolition bill through Parliament.

However, it was Sharp’s tireless work, teaching himself the law and fighting for the rights of runaway slaves from 1765 onwards, which led to the first legal breakthrough of the abolition movement in 1772 and ultimately to the passing of the bill banning British ships from carrying slaves in 1807.

All Saints vicar, the Rev Joseph Hawes, said, “We felt it was important, given our historic connection to this milestone in the fight for freedom, to offer a place where we can remember not only the contributions of the courageous abolitionists, but all those who have been enslaved, and to commit ourselves to the unfinished work of ending social injustice in all its forms.”

Interest in Sharp is also being revived by a restoration campaign in the borough. A group of local people have joined forces with All Saints Church to renovate Sharp’s grave and raise his public profile. Leading the local project is Hammersmith & Fulham Historic Buildings Group. Chairman Angela Dixon said, “Sharp is the most important historical figure buried in the borough. His tomb is in urgent need of repair and, in this bicentenary year of Britain’s abolition of the slave trade, it is fitting that a working group has been formed to get his grave restored and Sharp’s name better known to this and future generations.”

The Granville Sharp Working Group has representatives from the H&F Historic Buildings Group, Black British Heritage, All Saints Church, the Fulham & Hammersmith Historical Society and the Fulham Society. The working group is chaired by John Sheppard, who became aware of the poor state of the Sharp tomb while carrying out a borough-wide survey of sculptures for H&F Historic Buildings Group.

John said, “Our aim is to have the grave repaired in time for a memorial service on Sunday 8 July, the nearest Sunday to the anniversary of Sharp’s death in 1813.”

An application for funding has been made to English Heritage and the working party is seeking contributions from other organisations and individuals. Some of the tomb’s stone needs replacing and the group also wants to put up a plaque nearby with historical background on Sharp and the struggle to abolish the slave trade. The work is likely to cost at least £15,000. H&F Council is providing advice and support, with planners looking into nominating the grave as a ‘building at risk’ to give it extra status and protection.

Meanwhile Black British Heritage, which is part of the restoration project, also hopes to create another permanent tribute to Sharp’s legacy by erecting a bust or working with local schoolchildren to create a mosaic in his memory. Possible locations for the memorial include Bishops Park or Putney Bridge Station. The group has already produced a Black Heritage Trail with a map showing the borough’s links to slavery, the abolition movement and black history as well as organising a concert of slavery era music and dance by local schoolchildren at Fulham Town Hall last year.

Deputy Mayor, Cllr Andrew Johnson, said, “We are delighted to be supporting the Granville Sharp Working Group, All Saints Church and Black British Heritage in raising the profile of the borough’s important historical links to the movement to abolish the slave trade. I hope other local people will support this extremely worthwhile campaign to restore Granville Sharp’s tomb.”

The service at All Saints Church at 6pm on Sunday 25 March is open to all residents and community groups. This date marks 200 years to the day that a Parliamentary Bill was passed to abolish the slave trade in the then British Empire.

Free storytelling, song and dance workshops linked to the bicentenary of the abolition of the slave trade are being run by Abundance Arts for children aged 7 plus at Fulham Palace, Bishops Avenue, SW6. Tuesday 10 April, 12 noon – 1.30pm and 2.30 – 4.00pm. Book a place by calling 020 7736 3233 or email education@fulhampalace.org >

The 200th anniversary of the Act of Parliament abolishing the slave trade will be commemorated at a special service at All Saints Church, Fulham, at 6pm on Sunday 25 March as part of a series of bicentenary events in Hammersmith & Fulham and across the country.

The church’s gospel choir and H&F Youth Choir, which is run by the council’s music service, will perform at the service. The borough’s Deputy Mayor, Cllr Andrew Johnson, will attend and sign a pledge for the council to work with other agencies to outlaw modern day slavery – or ‘human trafficking’ – in the borough.

For more details about the bicentenary events visit www.hlf.org.uk/rememberingslavery