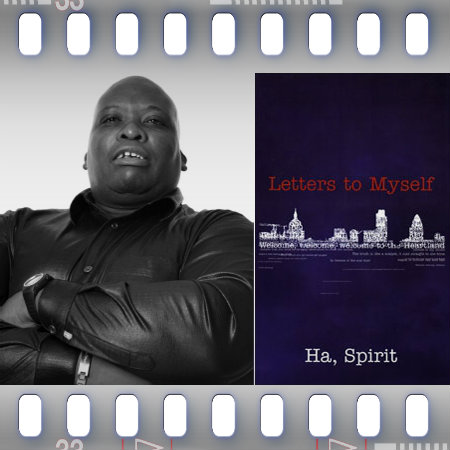 Ha, Spirit’s weapons of choice are no longer the left hook and big hand in your face; they’re, like he says, a packet of biros, a working journal and a computer terminal.

Ha, Spirit
Ha, Spirit is a former London Soho nightclub bouncer and minder turned poet, philosophiser, entrepreneur, and published author. Born and raised in Brixton South-London of Caribbean parents who both emigated from Clarendon Jamaica in the early 1950’s. ‘Letters to Myself’ is his first literary outing. The art of storytelling has always played a major part in the life of Ha, Spirit, commencing with the proverbial folk tales emanating out of the mystical Jamaican Countryside, told to him in his formative years by his parents, aunties and others who regaled such stories with avuncular affection.

Ha, Spirit see’s his writing as a form of mental therapy, both for himself and also for many of his readers. And thus he commenced writing in earnest in late 2001 after what he recalls as a particularly trying time in his forty odd years of existence. His only rescue was his pen and his trusted notepad which inturn provided him with a safe and cathartic psychological outlet and remedy to his intensely personal challenges at that time. Ha, Spirit’s artistic and creative abilities doesn’t just stop at writing, as he is also a trained Actor with an impressive CV, which includes roles on ‘Eastenders’ ‘The Bill’ and ‘Casualty’ amongst others.

He is at present halfway through the writing of a script about a young black boy growing up in South London in the mid seventies, and his physical and psychological rites of passage.

This is the first line from ‘Fire’ a strong, heartfelt, and thought provoking piece which opens this powerful and highly inspirational book by first time author Ha, Spirit. The book comprises a series of short (one pager) poems, essays, and stories which incapsulates much of the writers colourful life experiences and exploits thus far.

His words will tease you, at times shock you, and also move you with there intensity and pronounced force. But contained amongst these gems of wisdom and street-wise instruction is humour, tenderness, and of course clarity. Ha, Spirit tells it like it is, and never ever pulls his heavy punch when a particular point needs to be delivered. in the piece titled ‘Chocolate Cockney’ he writes,

As one happy reader wrote recently on his Myspace page “This is deep and intellectual reading…A work of courage and triumph”.

See what you think!!!

Ha, Spirit’s websites are www.Haspirit.com and www.myspace.com/haspirit where you will be able to listen to his live recordings of several uplifting and inspiring pieces from his book. Also listed on Facebook. As Ha Spirit-London Facebook

The blood of my ancestors is in my veins. All my vascular soft cell tissue is made up of their sweat, their fears, their survival issues and their dried out tears. I can tune into their very souls as they talk to me through intuition and mystical revealing, which even prevents me from getting caught speeding.

Their cries of desperation I can still feel, and this is 2007 and I am living it up for real. They will not forget me, lead me astray or play me down so my critics can gather round. I call it a “group soul mentality”, emanating from the evolutionary beginnings of my ancestral family, albeit each one that channels me has its own distinctive personality.

One Sunday every month I prepare a special chicken dinner, complete with yellow yams, green bananas, white rum and dumplings, and there is always a big plate set aside for them to dine as they make Ha, Spirit shine.

This is my religion of spiritual worship, not a Christian aspect or Islamic concept, simply a pure and heartfelt belief system for which there is no dogma or taboos, only a psychic network full of sometimes strange and thought-provoking news.

The above poem is taken from Ha, Spirit’s new book “Letters to Myself”
All Rights Reserved.

Click here for other articles by Ha Spirit
Jamaican Proverbs