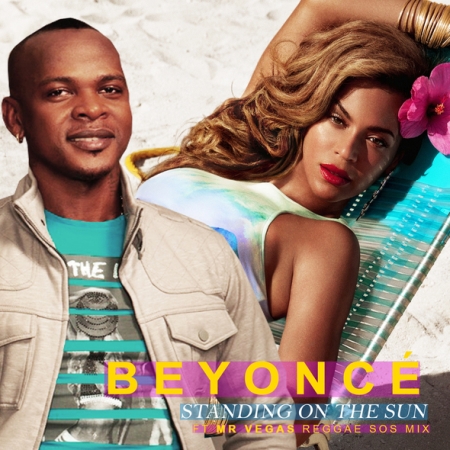 International megastar Beyonce has gone Dancehall with her latest single Standing on the Sun by collaborating with Dancehall Superstar Mr. Vegas.

The new track, which is a Reggae SOS mix of the original song, has kept tongues wagging as it is a prime candidate for the first single off her yet to be released album.

On the track, Mr. Vegas’ gritty yet melodic vocals perfectly complement Beyonce’s mezzo-soprano voice which is versatile on an authentic dancehall beat. He starts off in straight dancehall style with, “Gyal u body turn up mi seh it tun up tun up, gyal yuh hot like the sun seh u yuh tun up tun up…”. With Beyonce following, “My body is magnified, in the sun set me alight, my body in your delights, burn me up, set me alight…”

According to Mr. Vegas, the collaboration is a good one that he expects to go places: “This is a really good song, Beyonce’s people reached out to me and sent me the vocals and I reached out to renowned producers Clevie and Danny Brownie and we did the mix with the help of engineer Rohan Dwyer. I was a bit surprised when I heard the song being played everywhere in Jamaica a few days ago and since then it has been blowing up both locally and internationally”.

Mr Vegas believes this song is a sign that dancehall is seeing resurgence as several other dancehall artistes are working with top international acts. ” This is big and I have to confess that I am very happy with this opportunity. This song will open new ears to my style of dancehall and give me new fans. It’s a good time for me as I have Bruk It Down 2.0 to drop in September and we just finished shooting videos for Love Yourself, Give It To Har and Come Here Bubbler so this is like the icing on the cakequot;.”

The artiste, who is constantly on tour, just released three brand new tracks; ‘Love Yourself’, which is a reggae effort, ‘Give It to Har’, which is a signature bruk out tune and ‘Come Here Bubbler’, a summer scorcher. He says he is dedicating the summer to his fans that have been following him for the last decade and a half.